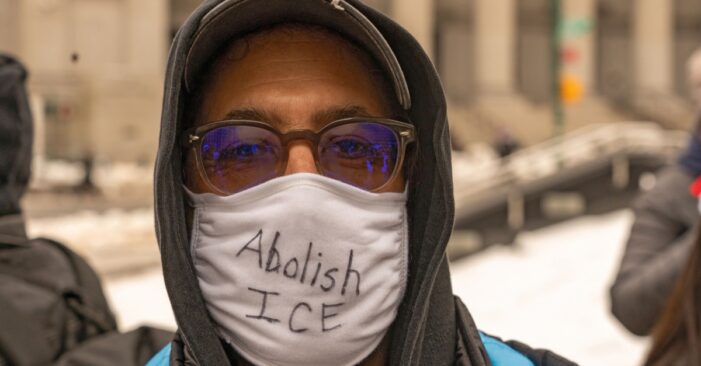 Demonstrators call to “Free Them All” during an Abolish ICE (Immigration and Customs Enforcement) protest for Javier Maradiaga on February 15, 2021 in New York City. (Shutterstock)

On October 13, the U.S. Department of Homeland Security (DHS) Office of Inspector General issued a report detailing ICE’s abuse of solitary confinement in immigration detention and incompetence regarding how it maintains records documenting the treatment of individuals subject to solitary confinement.

•ICE could not demonstrate it considered alternatives to segregation for 72% of individuals placed in solitary confinement.

•ICE did not record 13% of instances when individuals were placed in solitary confinement.

•ICE did not ensure detention facilities complied with the National Archives and Records Administration’s (NARA) retention schedules. As a result of ICE’s failure to properly retain records, 24 of 265 detention files were improperly destroyed.

The report was straightforward in its condemnation of ICE’s failure to adhere to its own detention standards and the resulting lack of transparency and necessary oversight.

In the same statistical sample, over half of the people ICE placed in solitary confinement had “special vulnerabilities,” including identifying as LGBTI, were on a hunger strike, suicidal, or having a mental illness, such as schizophrenia or bipolar disorder. And many of these instances were not properly reported in violation of the detention standards.

The report also found that ICE facilities did not comply with record retention requirements and violated a litigation hold where it agreed not to destroy records, including detainee segregation reports, after a lawsuit challenging a records retention schedule for detention-related records was brought.

Under the retention schedule, ICE was required to “retain detention files for 6 years after a detainee’s transfer or release from a facility and segregation reports for 7 years from the end of the fiscal year in which the detainee was released from segregation.”

The report provided the following example: “If a detainee was released from segregation in October 2014 (the beginning of our scope) and released from the facility the same month, a detainee’s segregation orders, which are in the detention file, could not be destroyed until September 2022.”

Despite this clear mandate, the report found that ICE could not provide 32 of the 265 detention files from the statistical sample and admitted to destroying 24 of those files. According to the OIG, 16 detention files subject to the litigation hold were destroyed in November 2020, eight months after ICE agreed to the hold. The OIG’s office was not able to uncover when the other files were destroyed.

The OIG’s report confirms ICE’s callous failure to preserve even basic data about solitary confinement—an extremely controversial practice that has been widely condemned. It is no surprise that because ICE does not conduct internal oversight to ensure facilities track and report solitary confinement and relies on self-reporting mechanisms that are not used uniformly, it is has failed to comply with its own detention standards.

It is a positive step that ICE has concurred with the recommendations contained in this report – including agreeing to develop better guidance and tracking mechanisms for collecting solitary confinement data and compliance with records retention schedules. There is no doubt, however, that these steps would not have been taken if ICE’s failures were not uncovered by the OIG’s targeted investigations.

Also, the steps ICE outlines are not enough. ICE states that it will comply with OIG’s recommendations by August 2022. What oversight will happen in the many intervening months to ensure data is collected and records are not destroyed?

The lawsuit brought in March 2020 to preserve records related to solitary confinement stemmed from a similar mistrust of ICE’s ability to monitor its own detention policies and practices and ICE’s overt attempts to destroy its own detention records. As groups who filed an amicus brief in that case noted, ICE’s abuse and mistreatment of individuals in its custody underscores the need for greater transparency and oversight and longer retention schedules for key documents such as solitary confinement records.