ICE Conducted Sweeping Surveillance Of Money Transfers Sent To And From The US, A Senator Says 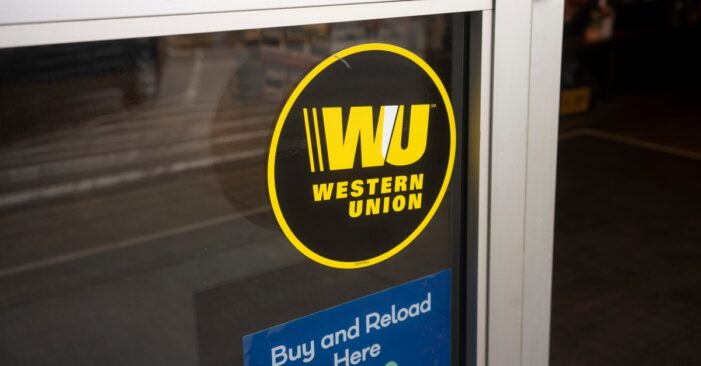 Lake Oswego, OR, USA – Oct 28, 2021: The Western Union sticker is seen at the entrance to one of its agent locations in a grocery store in Lake Oswego. Western Union is a global money wiring service. (Shutterstock)

Immigration and Customs Enforcement agents obtained millions of people’s financial records as part of a surveillance program that fed the information to a database accessed by local and federal law enforcement agencies, according to a letter sent Tuesday by Sen. Ron Wyden to the Department of Homeland Security inspector general requesting an investigation into whether the practice violated the US Constitution.

The mass collection of financial data — in this case money transfer records — is sure to place more scrutiny on law enforcement practices at an agency that’s best known, and often criticized, for arresting and deporting immigrants. Wyden and one privacy expert who spoke to BuzzFeed News raised concerns about the government surveilling people not because they were suspected of a particular crime, but simply because they used money transfers, which are popular in low-income and immigrant communities that are less likely to have access to banks. And if the program was in fact unconstitutional, it could also jeopardize criminal cases that used its data as evidence.

Wyden, the Oregon Democrat who chairs the Senate Finance Committee, wrote in Tuesday’s letter that ICE’s Homeland Security Investigations officials briefed his staff in February on the program and informed them that they had been using a type of administrative subpoena to obtain approximately 6 million records about money transfers above $500 to or from Arizona, California, New Mexico, Texas, and Mexico since 2019. ICE officials said the records, according to a Wyden aide, included the senders and recipients’ names and addresses.

Wyden’s staff had contacted DHS in January requesting the briefing, and the information provided was the first time anyone in Congress had been told about the effort, he wrote. ICE stopped the practice earlier this year after Wyden’s office inquired about it, he said.

HSI directed the companies to send the data to an organization, Transaction Record Analysis Center (TRAC), that facilitates local, federal, and state law enforcement access to bulk data. Law enforcement officials with access to the database are able to use it “without any kind of court supervision,” Wyden wrote in the letter, which was obtained by BuzzFeed News.

Once officials within ICE and DHS headquarters heard of the summonses — and the lack of policy and privacy safeguards — they directed HSI to terminate the existing summons and begin a legal analysis and policy guidance, said one DHS official who spoke on the condition of anonymity to comment freely. (Wyden also noted that no one in the local field office in Phoenix that issued the summonses sought legal guidance from HSI or DHS headquarters in Washington, DC.)

“Homeland Security Investigations (HSI) is committed to ensuring that our criminal investigative methods are not only effective in combatting transnational criminal actors and other security threats, but also consistent with the law and best practices,” a DHS spokesperson said. “HSI has paused its use of customs summonses while it works to ensure that policy properly guides the agency’s use of these and other administrative subpoenas and accounts for the appropriate role of such summonses in supporting criminal investigations.” The pause in summonses is specifically for the program involving money transfers.

A Western Union spokesperson said that the production to TRAC, which they described as once an agency of the Arizona attorney general’s office, came as a requirement of an anti-money laundering agreement that was enforced through a court order. Wyden wrote in his letter that the company provided the information as part of a settlement agreement with Arizona in 2010. The letter says that in 2019 the settlement expired and ICE stepped in and issued the summonses to Western Union, “each directing the company to transmit records of money transfers directly to TRAC for the next six months. In 2021, HSI started issuing similar customs summonses to Maxi.”

For its part, Western Union said that it works with law enforcement to comply with valid subpoenas and other legitimate requests. “We are also committed to protecting the personal data of our customers and take our obligations regarding privacy very seriously. We are unable to comment further on law enforcement investigations,” the spokesperson said.

Wyden’s claims are just the latest to raise questions about the agency’s use of administrative subpoenas to obtain records. ICE issued an administrative subpoena to BuzzFeed News demanding that the news organization identify its sources. The effort was later dropped after BuzzFeed News published a story exposing the subpoena. The DHS inspector general had also reported in 2017 that Customs and Border Protection had misused the customs summons authority in violation of agency policy.

Nathan Freed Wessler, an attorney with the ACLU who specializes in privacy issues, believes Wyden’s discovery could raise a whole set of problems, including with any criminal cases that relied on the records.

“This dragnet surveillance program from the Department of Homeland Security is illegal, and it is stunning that it was allowed to run for even a single day. Despite a total lack of individualized suspicion, and based only on the happenstance of living in a southwestern state, details of a huge number of people’s private financial transactions with family members and others were funneled straight to the government,” he said. “Courts have made clear that narrow subpoena authorities like the one DHS relied on cannot be stretched to enable indiscriminate bulk collection of Americans’ personal transactional data.”

Wessler said that if evidence in local or federal criminal cases was connected to this program, it could be tossed by judges.

Meanwhile, Wyden believes that the program showed that ICE had “abused its customs summons authority to engage in bulk surveillance” and should have known that it did not have the authority to conduct this type of surveillance. The fact that ICE funneled the information to TRAC meant that it had “outsourced” hosting of a bulk surveillance database to an entity outside of the federal government, he said.

Maxi and TRAC didn’t immediately respond to requests for comment.

Wyden also wrote that ICE officials had told him that “dozens of money transfer companies” have been sharing their data with TRAC voluntarily and that Western Union had asked for the subpoena of the records. A Wyden aide also said that the data from ICE represented about 3% of the records in the TRAC database.

“If this characterization is true, these companies utterly failed to protect the privacy of their already at-risk customer base. These money transfer businesses are disproportionately used by low-income, minority, and immigrant communities. Many users of these services are unbanked, and therefore unable to send money using electronic checking or international bank wire transfers, which are often cheaper,” Wyden wrote.

Wyden said he supported federal law enforcement investigating drug smuggling and money laundering but wanted such work to be done in a targeted way.

“Instead of squandering resources collecting millions of transactions from people merely because they live or transact with individuals in a handful of Southwestern states or have relatives in Mexico, HSI and other agencies should focus their resources on individuals actually suspected of breaking the law,” he wrote.