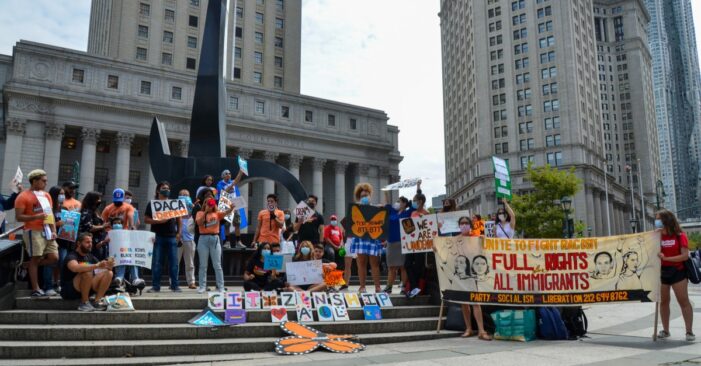 Activists and DACA recipients gathered at Foley Square in New York City during the “We are Undeniable” rally to demand citizenship for all on August 17, 2021. (Shutterstock)

By Linda Nwoke, Special to Journal

On Thursday, the 3rd of February, New York State’s Governor, Kathy Hochul, signed off the controversial new maps for the State’s congressional districts. Several minority groups had raised an outcry earlier in the week.

The Issue
Approximately nine years post-New Yorkers’ decision to take redistricting from the grips of politicians, a lot has happened due to the deadlock between members of the commission consisting of Republican and Democratic members. For consideration, the result is two rather than one single set of maps sent to the State’s capital, Albany. The group’s inability to reach a consensus and vote along the party line in determining congressional and State legislative districts for the next decade was a significant concern, especially among minority groups and communities.

For the political parties, a lot is riding on the map. Democrats are battling at the national level to avoid a Republican takeover of the House of Representatives later in the year in November.

If New York maintains its control of the sizable Democratic State, the party will own a portion of congressional seats at the federal level. State-wise, Democrats can use the process to increase their hold on the State’s Senate and Assembly as the majority and thereby to overturn the plan by Republicans to reclaim lost territory from 2018 to date.

The lack of consensus had given Democrats a significant political advantage over Republicans, despite criticism by some non-partisan groups. Before the Governor’s signing off, the State’s Legislature had approved the new maps on Wednesday the 2nd of February. Thus, out of the 26 congressional districts New York will be divided into for the 2023 elections, 22 communities will have Democrats as majority registered voters. The state Democratic leaders are convinced that the maps reflect the State’s population shifts over the last decade, 2010-2020. Republicans, on the other hand, are considering a legal challenge of the maps based on ‘violation of the state’s constitution.’

The Back Story
Post-2020 census, for the first time, in 2021, the process of redrawing New York districts was conducted in the State. An exercise to capture Assembly, congressional, and state Senate districts for the next ten years is based on population changes gathered from the 2020 Census.

In 2014, an agreement led to a constitutional amendment that will allow a fair and transparent process to support the drawing of state legislative and congressional district lines from Census data.

Thus, openness and fairness of elections remained central to the drive for the amendment.

The reform from the redistricting process aims to introduce greater independence and guarantee the protection of communities of interest, minority voting rights, and rational line-drawing.

Thus, the process, enshrined in the State Constitution, will not be changed without due consideration. It must reflect and protect the voice of New York voters.

The Governing Body and Why is the Redistricting Process Necessary?
‘The Independent Redistricting Commission’ comprising 10 New York State registered voter members was established to oversee the reform process outside the legislature. The redrawing of the districts in every State determines if a community can elect representatives of choice.
Important bodies like the local school board, city council, state legislature, and Congress. can be affected by this simple exercise. It can also influence the role of elected officials in responding to the needs of citizens, such as health care and ensuring equal educational opportunities for everyone.

This changing face of the country as a whole and the State, in particular, raises essential questions, especially in electoral politics.

Of note concern about the extent to which minorities, including immigrants’ representation across the different political levels, will be protected.

Other questions like to what extent are minority voices heard – do they have an equal say or an equal opportunity to elect representatives who consider their needs and interests?

All these and more are part of the issues that “redistricting” addresses thrown the redrawn map.
Therefore, community participation is paramount to ensure that their interests are heard and represented by the elected officials.

The adoption of the map without addressing the concerns weakens the voting strength of the communities.

Advocating for groups and communities of interest
To address the impact of the action on immigrants, a media briefing, organized and moderated by Asher Ross, the Senior Strategist of the New York Immigration Coalition (NYIC).

Other community-based organizations such as the Arab American Association of NY, DSI International Inc, Elmont Cultural Center, SEPA Mujer, and others participated in the discussion.

One of the issues, of course, was the seemingly waste of effort given the impasse, as explained by Murad Awawdeh, Executive Director, NYIC. According to Awawdeh, the communities worked to secure an accurate count to settle for a less than a fair set of district maps.
He had called for the public’s input before the sign off “The State Legislature …must hold a hearing for public comment after it draws its maps and before they are voted on.”

Mon Yuck Yu, Executive Vice President and Chief of Staff, Academy of Medical & Public Health Services, reiterated the importance of maintaining a fair redistricting process that recognizes the voices of the communities. According to Yu, “A fair redistricting process means the centering of the voices of people most impacted while keeping communities of interest whole, which ensures electing a representative of choice.”

She called out the State Legislature’s decision to vote on a set of maps without public input as unfair.” To ensure that this process is fair and equitable, we must have a public hearing after LATFOR’s maps are released … which will enable streamlining resources for the most vulnerable,” she said.

A fact that was emphasized by Yafa Dias, Lead Organizer of the Arab American Association of NY, “We have the right to ask for the Arab and Muslim communities in Bay Ridge and Fort Hamilton to be seen, placed, and counted as one district.”

She demanded that representatives and congressional members listen, assist, and advocate on their behalf on behalf of her organization.

Sadly, other groups consider the Independent Redistricting Commission’s inability to reach a consensus a failure to New Yorkers. According to Olabisi Ayo, Case Manager, DSI International Inc. “The Commission’s failures directly threatened the political representation of communities long shut out of the process, including New York’s growing African immigrant communities,” which her organization serves.

Mimi Pierre Johnson, President of the Elmont Cultural Center, called for action. She explained that redistricting might appear mundane, but it has a massive impact on every New Yorker.

She explains that “Whether we participate in the redistricting process or not, we allow politicians to make decisions about our lives. We, the people, are supposed to choose our representatives, not politicians choosing us. Our district maps should benefit us rather than allowing a handful of elected officials to retain their grips on power.”

An observation that will become a reality as the voices of the people were ignored, and political interests superseded citizens’ welfare.