How Contagious Is the Delta Variant? 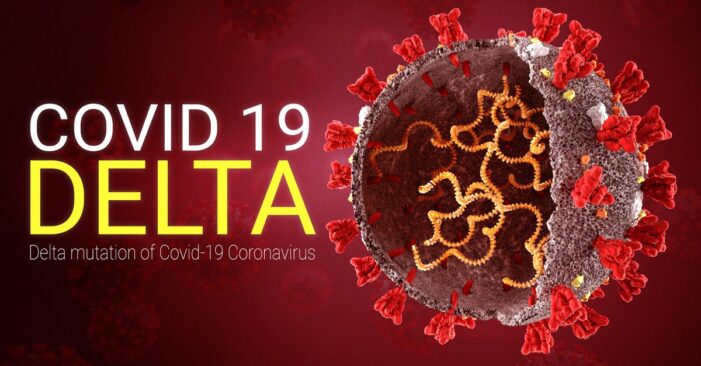 The Delta variant of the virus that causes Covid-19 is often described as highly transmissible. So, what does that actually mean?

Scientists studying Covid-19 say that Delta’s increased contagiousness means we need to update our thinking about exposure risks. Because people infected with Delta carry higher levels of virus than with earlier strains, the old rules of thumb no longer apply, they say—including the conventional wisdom that it takes 15 minutes of close contact with someone to get infected.

Delta has already changed public-health advice about masking. The Centers for Disease Control and Prevention on Tuesday recommended that vaccinated people resume masking indoors in certain parts of the country. And local officials have begun to reinstate mask mandates, including in Los Angeles County and St. Louis County.

CDC Director Rochelle Walensky said the guidelines were revised because new data on the Delta variant show that breakthrough infections for fully vaccinated people, though rare, carry a similar level of viral load as infections among the unvaccinated.

Here’s what scientists say we need to know about how Delta changes our risk calculus.

“Delta gets into your cells easier,” says John Volckens, a professor of environmental health who studies aerosols and respiratory disease at Colorado State University in Fort Collins, Colo.

Higher levels of virus mean that infected people shed more virus, scientists say. Exactly how much more virus is emitted into the air remains unknown. Having 1,000 times more copies of the virus in the respiratory tract “doesn’t necessarily mean that there’s 1,000 times more virus [released into the air]—although it could be,” says Linsey Marr, professor of civil and environmental engineering at Virginia Tech who studies airborne transmission of viruses.

Being vaccinated is the best way to reduce risk of contracting the virus, doctors say, though they advise even vaccinated individuals to take extra caution. The vaccines are somewhat less effective at preventing infections from Delta compared with earlier strains of the virus, but still protect strongly against severe disease and death, they say.

For unvaccinated people, Delta changes the old conventional wisdom that a person is most at risk of infection after 15 minutes of close contact with an infected person. With Delta, infection can likely happen in less than five minutes, scientists say. The variant may even be potent enough to infect an unvaccinated person with a fleeting exposure, such as a minute or two in an elevator, says Dr. Marr.

“Let’s say you had to spend 15 minutes with an infected person in a closed room before you would be exposed to enough virus to get sick. Now we’re talking about 1,000 times that potentially,” says Dr. Marr. “So that 15 minutes becomes just a few seconds.” Partially vaccinated people are also more vulnerable to Delta than vaccinated people are, scientists say.

Still, Delta poses a bigger threat than earlier strains for people spending significant time indoors with other people who are infected, he warns. Vaccinated people would likely have to be exposed for longer to get infected than an unvaccinated person would. “If you’re vaccinated, maybe 15 minutes or half an hour is what you need to get a big dose. If you’re not vaccinated it will take hardly anything,” he says.

The CDC’s Dr. Walensky on Tuesday said that transmission by vaccinated people is possible. “In rare occasions, some vaccinated people infected with a Delta variant after vaccination may be contagious and spread the virus to others,” she said.

Many people have long considered outdoor activities safe but scientists say it makes sense to rethink that assumption in certain situations. Delta increases the risk of outdoor transmission—especially for unvaccinated people, scientists say. “Outdoors does become more risky,” says Dr. Marr. If you are close to someone and in their respiratory plume—the air released in a breath—it may be possible to become infected, she says. The risks increase outdoors in more crowded settings, such as a concert or a baseball game.

If you are vaccinated, activities like biking, jogging or hiking—where you’re moving and exposure to an infected person is very brief—should be safe without a mask, doctors say. “Between being vaccinated and being outdoors, that’s pretty good protection,” says Dr. Marr. She does recommend even vaccinated people wear a mask outside in crowded settings.

Outdoor risk increases if you’re in a wedding tent or structure where three sides are enclosed. “I don’t classify that as outdoors,” says Dr. Volckens. “The air exchange is limited. The air is more confined so the accumulation of this exhaled air is rebreathed.”

The CDC on Tuesday recommended that people who are vaccinated start wearing masks indoors again in parts of the country where transmission is considered substantial or high. Roughly 46% of U.S. counties are considered high-transmission areas and 17% are considered to have substantial levels of transmission, according to CDC data. Cases are rising rapidly in states including Arkansas, Florida, Louisiana, Missouri and Alabama, where less than half of the population is vaccinated.

Dr. Marr says while there’s low risk of developing serious illness from Covid-19 if you’re fully vaccinated, you can minimize your risk of getting a milder infection—and of potentially transmitting the virus onward—by wearing a high quality mask, especially in public places indoors. “I’ve gone back to wearing a mask indoors when I don’t know people’s vaccination status,” she says.