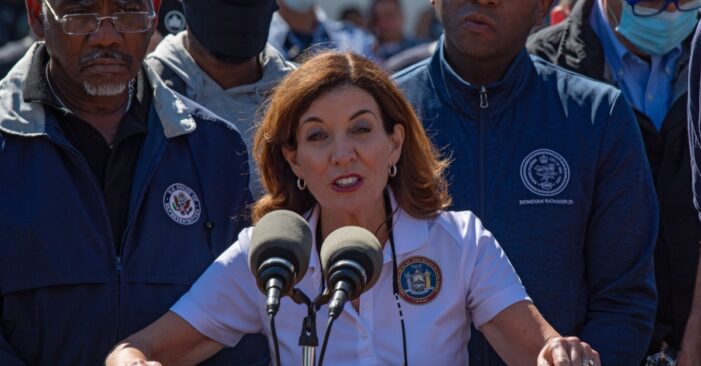 By Samantha Maldonado and Josefa Velasquez, THE CITY

Nearly five months after Hurricane Ida, just under a million dollars have been paid to New Yorkers from the city and state’s storm relief fund for undocumented immigrants and others ineligible for federal aid — far short of the $27 million pledged.

Cash assistance is being dispersed or in the pipeline to nearly 500 applicants, with some slated to get multiple payments, but nonprofit administrators don’t expect the full pool of money to be used up.

Gov. Kathy Hochul has included the leftover funds in her proposed budget, without a specific plan for what comes next.

Groups distributing the dollars are pushing for the creation of a permanent relief fund for undocumented New Yorkers affected by natural disasters in the future.

“I don’t see a scenario where they’ll actually spend the full amount,” said Becca Telzak, deputy director of Make the Road New York, one of the six community-based organizations administering the funds.

She stressed that the effort should still be seen as a success.

“​​Even if it doesn’t seem like that much money was spent, I think just that amount of money for the number of people that were impacted, it makes such a huge difference,” she added. “We should look at this as a model of how to create programs like this moving forward.”

A Hug From Hochul
Hochul and former Mayor Bill de Blasio created the fund to help New Yorkers excluded from FEMA assistance in the wake of the September storm that killed 13 people in the five boroughs, including 11 in basement apartments.

As of the end of January, 160 applicants across the state had received $907,153 in funding, with an average payment of about $5,000, according to Mercedes Padilla, a spokesperson for the state’s Office for New Americans.

The fund offered a maximum of $72,000 per eligible household, but it’s not likely any applicant received the full amount, according to administrators.

To secure funds, applicants must document losses by showing proof of some kind. That can take a while and prove difficult if, for example, receipts were lost to flooding. In that case, applicants can resort to self-attestations.

Among those needing help is Nancy Ospina, who had recounted her ordeal at a news conference with Hochul and other officials at the Queens Museum as they unveiled the fund in late September.

Her basement apartment in Woodside had flooded within minutes on Sept. 1 as rain pummeled the city.

The 65-year-old housekeeper lost all her possessions — furniture, clothes, all of the Christmas decorations she’s collected through the years and memorabilia that made her apartment of 20 years a home.

“Everything was gone. Absolutely everything,” she told THE CITY Friday in Spanish.

She recalled wading through shin-deep brown water, unplugging appliances and crying out “God help me,” while taking videos and pictures to document the deluge ruining her belongings. Neighbors implored her to get out, saying that she could get electrocuted.

In November, Ospina received a check from the fund for $6,400, the bulk of which went toward a new apartment in Jamaica that costs $400 a month more than her old place. The remainder she used to pay down bills that had accrued during the pandemic as work became more scarce, along with a few household basics.

She says the aid was a lifeline — “I can’t be ungrateful for the money I received” — but not enough.

“You feel shame going through this and asking for help. It’s terrible,” Ospina said. “I put myself out there and when the news conference ended the governor gave me a hug and told me that they were going to help me. The truth is, I was expecting a little bit more.”

In a statement, Hochul spokesperson Hazel Crampton-Hays emphasized the governor’s commitment to “helping all New Yorkers recover” from the storm.

“We will continue to work with our nonprofit and community partners to help ensure New Yorkers get the relief they need,” she said.

Most Aid to NYC
Some applicants can receive multiple payments on a rolling basis for up to 18 months, to cover temporary shelter if needed. The fund can also pay to replace damaged furniture, clothing and other personal property.

About 76% of the money has gone to people living in New York City, according to THE CITY’s analysis of data provided by Padilla.

Another 236 applicants have been approved for funds. In all, 474 households applied by the Jan. 4 deadline, which had been extended from Dec. 6.

Processing claims will likely continue into next year, Padilla said. Hochul’s inclusion of the funds in the proposed 2023 budget will ensure the state can respond to all the applications received, she added.

The Chinese American Planning Council, another one of the fund administrators, has made two rounds of payments to households and is gearing up for a third round, according to Steve Mei, the Council’s director of Brooklyn community services.

“They’ve been able to get on their feet. This program is helping,” he said.

But even for those who got or will get a check, “there’s not nearly not nearly enough for them to kind of really be able to sustain themselves, especially for families of three, four or five,” Mei said.

Short Window
Although the state briefly extended the deadline to apply to the fund, it still fell during the holidays, which made it difficult to engage potential applicants, according to Telzak. She said she heard from immigrants who needed help but missed the second deadline.

“The application period to apply was very short — especially for a kind of community like this, who never would assume they’re eligible for government programs, because that’s just what the reality has been for so long — it takes longer to reach those community members,” she said.

Mei also cited the challenges of conducting outreach and recruitment for a government program aimed at immigrants.

He and Telzak both noted many people who inquired about the fund later found that they were eligible for federal aid — for example, if they have a child who is a U.S. citizen.

Padilla, with the state Office for New Americans, said 590 people who inquired about the excluded relief fund were referred to FEMA.

As of Feb. 1, FEMA has approved more than $200.1 million in aid to 40,385 people statewide, with 29,402 people in New York City receiving just over $143.5 million, according to numbers provided by agency spokesperson Angelique Smythe.

Statewide, the average federal payment was $4,955, and within the city the average was about $4,882. FEMA found just about 45% of applicants who applied for funds to be eligible to receive them.

Some New Yorkers previously told THE CITY that the amount of FEMA aid they received was insufficient to cover their repairs and losses.

A Permanent Pool
Some state lawmakers are pushing to make a pool of money permanent.

”Unfortunately, natural disasters will continue to happen, and could get worse, as we face the consequences of climate change and lack of infrastructure investment,” said Assemblymember Catalina Cruz (D-Queens) whose district includes neighborhoods hardest hit by the storm.

In November, Cruz introduced legislation to create the Community Disaster Relief and Recovery Act, a statewide program for New Yorkers excluded from federal assistance following a natural or man-made disaster.

In September, Assembly Speaker Carl Heastie called making the fund for excluded New Yorkers permanent a “no brainer,” while State Senate Majority Leader Andrea Stewart Cousins said it was “certainly something we would consider and discuss.”

As for what they’d like the state to do with any remaining funds, Mei identified a need for rent relief, whether or not a tenant’s hardship was related to Ida, and Telzak urged lawmakers to use the funding to support “the communities that this program was intended to support.”

She added, “It’s just important that that money continues to stay with the immigrant community and not get allocated elsewhere.”

This story was originally published on [February 4, 2022] by THE CITY.”