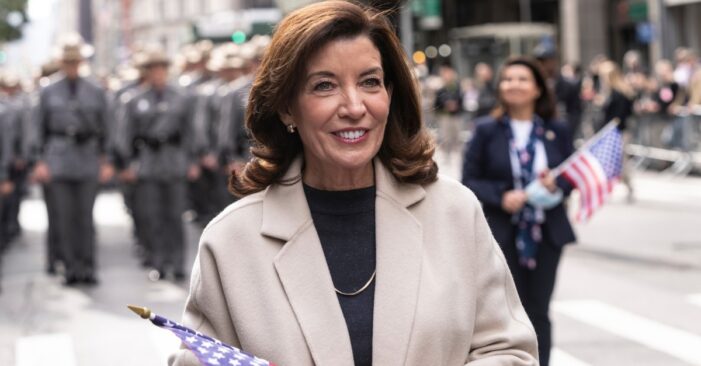 Commuters should resolve in 2022 to return to their Manhattan workspaces, Hochul told business leaders Thursday at a breakfast event hosted by the Association for a Better New York.

“How about this New Year’s resolution? That in the days after New Year’s that we say, ‘Everybody back in the office,’” Hochul said to cheers. “You can have a flex time, but we need you back at least the majority of the week.

“Come on back New Yorkers — we miss you,” she added.

However, many on social media dismissed the invite, arguing that working from home has benefited parents and those with long commutes.

Some excoriated the governor as they accused her of pandering to her business suit-clad audience.

“Workers are more productive, have more time to spend leisure $$, and if parents, are more likely to stay in the work force when WFH is available/common/not penalized,” tweeted author Racheline Maltese.

“Some work requires being on site, but thinking mandatory office time improves jobs that don’t? Yeah no.”

I trust this came from a good place; sadly it came from “return to normal” mindset

Yes, folks need to start coming back, but days of office EVERYDAY/Hour are gone

Our job as leaders is to create a new normal that meets NYers where they are https://t.co/8uF5vrPFEO

City Public Advocate Jumaane Williams, who is mounting a primary challenge against Hochul, also said that the officials need to help workers and businesses find a balance post-pandemic.

“I trust this came from a good place; sadly it came from ‘return to normal’ mindset,” he tweeted. “We all know now ‘normal’ never worked. Yes, folks need to start coming back, but days of office EVERYDAY/Hour are gone.

“Our job as leaders is to create a new normal that meets NYers where they are,” he added.

Andrew Goldstein, a primary care doctor, warned that the push could backfire.

“This is terribly anti-public health as cases rise,” he wrote. “Have political courage. Be a leader. Don’t let commercial real estate interests harm our people.”

This is terribly anti-public health as cases rise.

While there is growing concern about a holiday surge in coronavirus cases, Hochul commended the city for its handling of health and safety protocols, as well as vaccination mandates, that have led to the city having the lowest infection rate in the state.

“People need to know that in a place like New York City, the infection rate is 1%. People are vaccinated, they’re getting their booster shots. They’re wearing masks walking down the street even when they’re not required to,” the governor said. “It is safe to come back. Send that message out to your employees.”

A recent study by the Partnership for New York City found just 28% of Manhattan office workers are back at their desks and predicted only 49% will return by the end of January.

The governor, meanwhile, touted projects across the five boroughs including the extension of the Second Avenue Subway and plans to overhaul the Port Authority Bus Terminal as she congratulated President Biden on his recently signed $1 trillion infrastructure package.

Hochul, running for a full term in office next year and facing an increasingly crowded Democratic primary field, also said she is prepared to work with Mayor-elect Eric Adams to address crime and homelessness.

“New York City has faced crime before, we’ve overcome it, the fact that this was not a long slump into crime, it’s a short spike downwards which means we can pop up quickly,” she said.