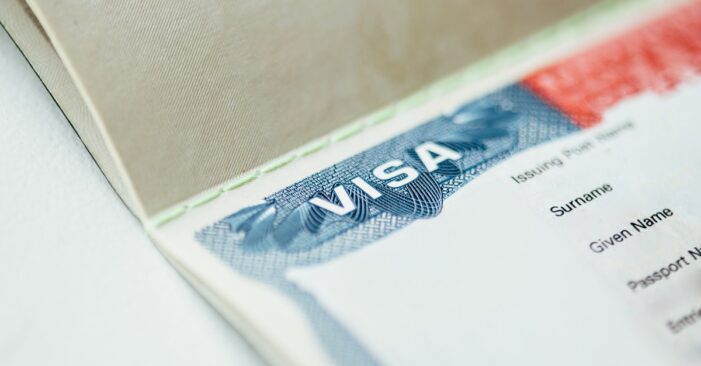 WASHINGTON — Laurens Van Beek left his parents’ Iowa City home on Tuesday with three suitcases full of clothes and electronics to board his first international flight in 17 years. He doesn’t know when he’ll be back.

Van Beek grew up in Iowa but was born in the Netherlands. His parents, who own a small jewelry shop, have renewable work visas. But as of his 21st birthday, just before his senior year at the University of Iowa, he no longer qualified as their dependent.

Van Beek got an international student visa and extended it for three years of postgraduate training. Now 24, he’s a software developer who works in DNA synthesis, But when that clock ran out, so did his ability to legally stay in the U.S. He returned to the Netherlands.

“Everything that we did since coming [to the U.S.] in 2005 has always been by the book,” he said. “I definitely didn’t think it would be this difficult.”

More than 250,000 dependent visa holders across the U.S are at risk of leaving the country in which they were raised after “aging out” of qualifying for lawful status under their parents’ visas. Thousands have already aged out and have been able to stay under temporary visas or have voluntarily left the country.

Now, after years of advocacy, the so-called documented Dreamers have caught the attention of Congress. Last year, a bipartisan group of lawmakers led by Rep. Deborah K. Ross (D-N.C.) introduced the America’s Children Act, which would establish protections to prevent children raised in the U.S. from aging out, provide a pathway to citizenship for them and let people like Van Beek come back.

Documented Dreamers are among the few immigrant groups to receive support of both Republicans and Democrats at a time when immigration policy has become so contentious that nearly any attempt at reform is unlikely to succeed.

There has long been support for the broader population of immigrants brought to the U.S. as children, including those with protections under the Obama-era Deferred Action for Childhood Arrivals program, or DACA.

Ross pointed to recent advocacy by business leaders that she said has accelerated the call for change. In a letter to the Department of Homeland Security last month, tech giants including Amazon, Google and Twitter said immigrants are key to alleviating critical worker shortages and urged policymakers to help documented Dreamers stay in the U.S.

That need to retain people who were trained and educated in the U.S., combined with unity among various immigrant groups, could be the key to reform, Ross said. Her bill probably could pass the House but faces a more difficult battle in the Senate, where immigration legislation lacks public support from enough lawmakers to reach the 60-vote threshold for passage.

“I am cautiously optimistic that it would be included in the Senate package,” she said.

Many work visas are renewable but don’t offer a pathway to citizenship. Among those who can apply for permanent residency — usually through sponsorship from a family member or employer — backlogs have become extremely lengthy for people from India, China and other countries. That’s because the U.S. limits how many green cards each year go to people from any given country. Indian nationals with professional degrees who have certain employment-based visas face an estimated lifetime wait.

Advocates say aging out primarily affects the children of Indian visa holders, an estimate based on federal data showing they represent a majority of the child green card backlog. The largest share lives in California.

Reet Mishra, an incoming senior at UC Berkeley, was born in India and moved to Sunnyvale, Calif., at age 8 with her parents and younger sister.

When Mishra’s family applied for green cards, their “priority date” — the date the federal government received the application — was July 2014. Every month they checked the State Department website to see whether they had made it to the front of the queue.

Mishra has now aged out of qualifying to become a permanent U.S. resident under her parents’ application. She switched to a student visa to continue her studies in bioengineering, electrical engineering and computer science. She plans to get a doctorate degree and dreams of working in medical diagnostics.

But the day in April that Mishra got her new visa was bittersweet.

“I was overjoyed at the fact that I could at least stay here longer,” she said. “But it was a little sad because it kind of put the nail in the coffin that my future is set on this path that is so uncertain now.”

Dip Patel was also born in India. At age 4, he moved with his parents to Canada, where they became citizens. Several years later, the family moved to the U.S., where his parents opened a convenience store in Illinois under E-2 work visas, which are available to immigrants from 81 participating treaty countries, including Canada. Now 26, he works as a pharmacist for a rural health system in Illinois under a work visa for Canadian professionals.

For five years, Patel has spent his free time trying to help people who grew up in similar situations. Frustrated that no one seemed to understand the difficulty he faced navigating the visa process, he researched how to advocate for himself and others.

He called congressional offices and attended events at which members would be present. He educated immigrant advocacy organizations on the issue of aging out.

Lawmakers initially didn’t have answers to his questions. One said he was focused on helping DACA recipients and couldn’t help Patel.

“I was trying to explain to him how we’re all in the same boat,” Patel said, recalling that conversation. “I’m trying to show that there’s broken parts of the system, and you guys are addressing them, but you’re ignoring obvious flaws.”

Patel started a formal group to support and advocate for documented Dreamers, calling it Improve the Dream. He was surprised by the response — thousands of young adults on the cusp of aging out or who already had.

In 2019, during a pharmacy school rotation near Washington, D.C., Patel fought for documented Dreamer protections in the Dream and Promise Act, intended to provide a path to citizenship for people illegally brought to the U.S. as children. But House Democrats voted against an amendment to allow the children of certain holders of work visas to apply for green cards.

The Dream and Promise Act of 2021, should it be passed by Congress, does include documented Dreamers. Even so, Patel noted that it wouldn’t fix the root cause of aging out. At least 104,000 young adults will age out of their visas over the next two decades, according to the Cato Institute, a libertarian think tank in Washington,.

“It’s a one-time solution,” Patel said. “Without a fix to aging out, there’s going to be more people either becoming undocumented or being forced to leave.”

In high school, Patel had considered himself a “Dreamer,” a moniker for immigrants who would have benefited from the legalization measures in the failed Dream Act, which came five votes shy of passing the Senate in 2010. When President Obama announced DACA in 2012, the original memo on the program didn’t make clear that people must lack lawful immigration status to qualify. Patel and others in his position weren’t eligible.

“When there are talks about comprehensive immigration reform, there’s this rhetoric about just getting into line,” Patel said. “The truth is, there is no line. We’re perfect examples of, ‘OK, show us what exactly we should have done instead.’”

Patel worked with David Bier, associate director of immigration studies at the Cato Institute, to put together the framework for what became the America’s Children Act. Since the bill was introduced, Patel and other members of Improve the Dream have made several visits to Washington.

One of the trips was for a Senate hearing in March on removing barriers to legal migration. Athulya Rajakumar, a 23-year-old Dallas resident who was born in India, gave emotional testimony about her brother’s death by suicide after the uncertainty of his immigration status contributed to severe mental health issues. Now Rajakumar faces leaving her mother alone in the U.S. when her visa expires this year.

Over the last several months, the Senate bill has gained some bipartisan support, with five Republican co-sponsors.

Bier has been advocating for young people who age out of their parents’ visas since Obama’s presidency. After the possibility of comprehensive immigration reform was ruled out and the conversation turned to assisting Dreamers, Bier said he pointed out to congressional leaders that legislation at the time excluded those aging out of visas.

“This is one of many issues in the immigration space where Congress just didn’t have the vision to see a future where the backlog is unbelievable,” he said.

Political analysts were encouraged by the recent passage of bipartisan gun legislation in Congress. Theresa Cardinal Brown, managing director of immigration policy at the Bipartisan Policy Center, said she’s not sure whether that kind of momentum will translate to breaking the political impasse on immigration.

Brown said it’s unlikely that a solution for documented Dreamers would pass on its own, without Congress simultaneously addressing other issues, including DACA, border enforcement, asylum and immigrants in STEM (Science, technology, engineering, and mathematics) careers.

“On gun control, it’s what policies will have the largest effect. On immigration, it’s which people get to stay and who is left out,” she said. “That’s a major differentiator. Is it better to get something for some people than nothing for anybody?”

But Brown said the urgency of the situation for DACA recipients could propel some movement on immigration reform. DACA is hanging by a thread — on Wednesday the U.S. 5th Circuit Court of Appeals in Louisiana is set to hear oral arguments in a case that will decide whether such an expansive program is lawful.

Van Beek, the software developer from Iowa, said he and his parents initially didn’t realize that their work visas did not afford them a pathway to citizenship. He started paying more attention to his immigration status as he got closer to 21.

Twice, he attempted to apply for an H-1B visa for people with specialty occupations. But the program is competitive; this fiscal year, 484,000 people registered to apply for just 85,000 visas.

Van Beek is looking forward to spending time with the extended family he grew up seeing only on video calls. Citizenship in the Netherlands allows him to live in Belgium, where his company has an office.

The company is trying to get him an EB-3 visa for skilled workers. In the meantime, he can visit his parents occasionally but doesn’t know whether he can permanently come back.

Van Beek is frustrated about how impenetrable the immigration system can be. But he’s also been heartened by the support of his company and friends, who have been calling their representatives to advocate for immigration reform.

“It’s not just about border politics,” he said. “It’s also just about people: Kids and young adults like myself who grew up here from young ages are essentially American in every way but the piece of paper.”