Harris Calls for Pathway to Citizenship for Dreamers on DACA Anniversary 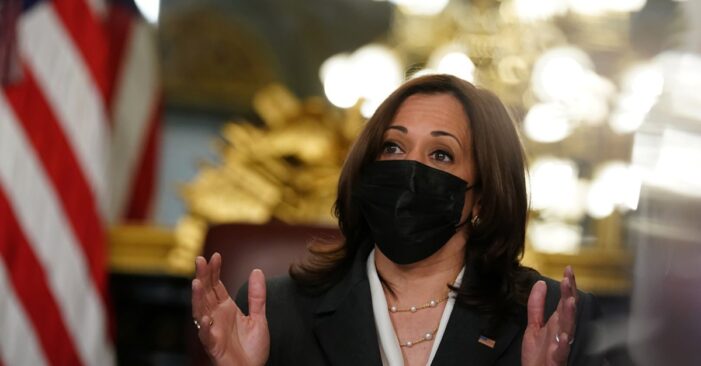 U.S. Vice President Kamala Harris holds a conversation about Northern Triangle countries of Central America and the migrants to the southern border, at the White House, Washington D.C.,22 April,2021. (Shutterstock)

By Morgan Chalfant, The Hill

Vice President Harris on Tuesday renewed a push for immigration reform, calling on Congress to create a pathway to citizenship for millions of immigrants during a meeting with immigrant care workers.

The push from Harris came on the ninth anniversary of the Obama-era Deferred Action for Childhood Arrivals (DACA) program.

“Even with DACA in place, we know that Dreamers live in a constant state of fear about their status and about their future,” Harris said. “It is critically important that we provide a pathway to citizenship to give people a sense of certainty and a sense of security.”

Harris’s meeting with immigrant women who are members of the National Domestic Workers Alliance, including two DACA recipients, put the spotlight on an issue that has otherwise taken a backseat to negotiations on infrastructure and President Biden’s Americans Jobs Plan.

Former President Obama created the DACA program in 2012 by executive order to temporarily shield immigrants, often called Dreamers, from deportation. The Dreamers are migrant who were brought to the United States as children and do not have U.S. citizenship or legal residency status.

Biden signed an executive order preserving the DACA program shortly after taking office, after the Trump administration sought to dismantle the program. It has been subject to legal challenges throughout the years, and the Biden administration has pushed for Congress to codify DACA into law and pass a broader immigration overhaul.

At the start of her remarks, Harris said that DACA was “under threat” from the Trump administration, recalling a moment when she as a senator questioned John Kelly, Trump’s nominee to lead the Department of Homeland Security, about whether he was willing to maintain the program.

Wednesday’s meeting was attended by Sens. Dick Durbin (D-Ill.) and Bob Menendez (D-N.J.), both of whom have been key leaders on immigration reform for Democrats.

Menendez is a co-sponsor of Biden-backed legislation, the U.S. Citizenship Act, which would provide a pathway to citizenship for the estimated 11 million undocumented immigrants living in the United States.

The Senate Judiciary Committee, chaired by Durbin, earlier Tuesday held a hearing on the American Dream and Promise Act — immigration reform legislation that passed the House earlier this year but faces an uncertain path in the Senate. Democrats have a narrow margin in the upper chamber, and there are longstanding disagreements between the parties on the issue of immigration.

The American Dream and Promise Act would create a pathway to citizenship for Dreamers, individuals with temporary protected status and deferred enforced departure holders. An estimated 2.5 million immigrants would be affected by the bill.

Harris on Tuesday called on the Senate to pass both the American Dream and Promise Act and the Farm Workforce Modernization Act, saying that there is “urgency to this moment.” Both pieces of legislation passed the House earlier this year.

The immigrants that we are talking about are making incredible contributions to our nation and, dare I say, as we all know, history. This is a nation that was founded by immigrants,” Harris said.

“So, in this regard, there is not much that is new except for some people’s perspective about what should happen at this moment in our history versus what has happened in the past. But it is time for us to correct course. It is time for us to renew our embrace of the traditions and the history of America and create a pathway to citizenship,” she added.

The event came on the heels of Harris’s first trip abroad as vice president, during which she traveled to Guatemala and Mexico to advance her efforts to tackle the root causes of migration. The trip was partly marred by controversy when Harris angered progressives by telling would-be migrants, “Do not come.”

She also withstood criticism for struggling to answer a question during an NBC News interview about why she hadn’t visited the border.

Biden similarly met with recipients of the DACA program in May as part of a renewed push for action on immigration reform, even as the White House remained chiefly focused on bipartisan infrastructure talks.

The White House may be less willing to spend tremendous political capital on immigration given the difficulty of passing bills. Immigration has long been a divisive political issue, and bipartisan immigration talks in the past have collapsed.

Durbin said at the outset of Tuesday’s hearing that passing the American Dream and Promise Act would help grow the U.S. economy and create jobs.

“We need a functioning immigration system that welcomes immigrants so we can grow our economy and put America on track to be a winner in the 21st century,” Durbin said. “There is no excuse for inaction. For too many years congress has looked the other way and found another excuse to put off this decision.”

Sen. John Cornyn (R-Texas), meanwhile, criticized the bill shortly thereafter, arguing that it would extend a pathway to citizenship to adults, not just Dreamers, and incentivize illegal immigration.