‘Guilty’: Jury Finds All 3 Men Guilty of Murder in the Killing of Ahmaud Arbery 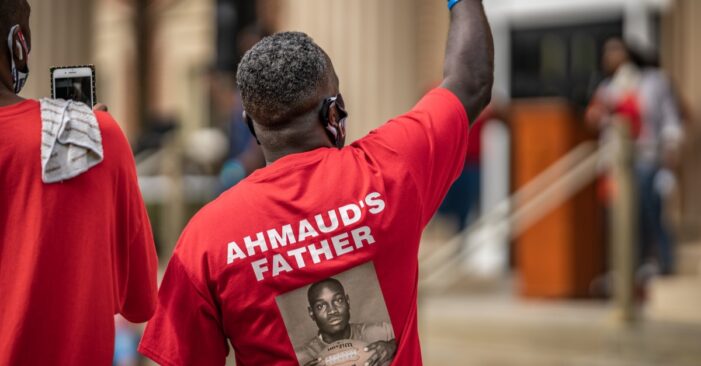 Marcus Arbery, Sr., father of Ahmaud Arbery, at the protest opposing bond for suspects in the shooting death of his son. – November 11, 2020 (Shutterstock)

A Georgia jury convicted three white men of murder on Wednesday in the death of Ahmaud Arbery, 18 months after the 25-year-old Black man was chased down and shot to death while out for a Sunday jog.

McMichael’s father, Gregory McMichael, 65, was found not guilty of malice murder but was convicted on the remaining charges, including the felony murder counts.

The McMichael’s neighbor, William “Roddie” Bryan, 53, was found guilty of three of the felony murder counts as well as charges of aggravated assault with his pickup truck, false imprisonment and criminal intent to commit a felony.

Calling her son, Ahmaud, by his nickname “Quez,” Cooper-Jones said, “He will now rest in peace.”

The jury verdicts were read in court by the presiding judge in the case, Timothy Walmsley.

Marcus Arbery, who was in the courtroom, shouted out “long time coming” as the verdicts were read. The outburst prompted Walmsley to halt the proceedings briefly and order Marcus Arbery to leave the court.

As the verdicts were read in court, none of the defendants showed any emotions.

Outside the courthouse, a huge collective cheer went up from a large crowd of protesters.

The Rev. Al Sharpton, who was in Brunswick throughout the trial and sat in the courtroom with Arbery’s parents, led a prayer of thanks outside the courthouse, “we’ve never had a Thanksgiving Day like today.”

“Let the word go out all over the world that a jury of 11 whites and one Black in the deep South stood up in the courtroom and said Black lives do matter,” Sharpton said.

President Joe Biden released a statement following the verdicts saying Ahmaud “should be here today” and that “the verdict ensures that those who committed this horrible crime will be punished.”

“While the guilty verdicts reflect our justice system doing its job, that alone is not enough. Instead, we must recommit ourselves to building a future of unity and shared strength, where no one fears violence because of the color of their skin,” Biden’s statement read.

Prosecutor says jury ‘did the right thing’
The lead prosecutor in case, Linda Dunikoski, joined Arbery’s parents at the post-verdict news conference to thank them for putting their faith in her and her prosecution team, saying, “This was a gigantic team effort.”

“The verdict today was a verdict based on the facts, based on the evidence. That was our goal,” Dunikoski said. “The jury system works in this country and when you present the truth to people and they see it, they will do the right thing and that’s what this jury did today in getting justice for Ahmaud Arbery.”

Dunikoski was tapped to lead the prosecution team after Cobb County District Attorney Broady Flynn was appointed as the special prosecutor in the Glynn County case after two previous district attorneys refused to file changes against the men, finding their actions appeared justified. Former Brunswick Judicial Circuit District Attorney Jackie Johnson, who once had a working relationship with Gregory McMichael, was accused of mishandling the case, leading to her indictment in September on felony charges of violating her oath of office and obstructing police.

The McMichaels were arrested and charged with Arbery’s murder about two months after the fatal Feb. 23, 2020 shooting in the Satilla Shores neighborhood near Brunswick. Bryan was arrested about two weeks later.

The arrests came only after a cellphone video Bryan took of the confrontation that captured part of the shooting and was heavily used by both prosecutors and defense attorneys during the trial was leaked to the media despite Bryan having turned it over to Glynn County police on the day of the killing.

“To tell you the truth, back in 2020 I never thought this day would come, but God is good,” Cooper-Jones said.

Verdict delivered
The jury sent Walmsley a note around 1:30 p.m. on Wednesday saying they had reached a verdict after deliberating about 11 hours over two days.

The panel began deliberating the nationally televised trial on Tuesday after hearing 13 days of evidence and listening to numerous witnesses, including the testimony of defendant Travis McMichael, 35, who claimed he shot the unarmed Arbery with a shotgun in self-defense during a face-to-face fight over his weapon.

The defendants all face a maximum sentence of life in prison.

During the trial the jury heard wildly different theories based on the same evidence in the racially charged case. Prosecutors alleged the defendants pursued and murdered Arbery because of wrong “assumptions and driveway decisions” they made that the Black man running through their neighborhood had committed a burglary, while defense attorneys countered that Arbery was shot in self-defense when he resisted a citizen’s arrest.

Prosecutors claimed Arbery was out for a Sunday jog and was spotted by a community resident inside a home that was under construction where Arbery had been previously captured on security video looking around but never taking anything, according to the evidence.

The chase of Arbery started when Gregory McMichael, a retired Glynn County police officer, spotted Arbery running past his home. Prosecutors said Gregory McMichael rushed into his residence to fetch his gun and his son, Travis, who armed himself with a Remington pump-action shotgun before they got into a truck and chased after the Black man.

Bryan, who lived near the McMichaels, joined the chase not knowing why the McMichaels were chasing Arbery and told investigators that he used his truck to help corner Arbery just before Travis McMichael shot him.