Federal Judge Blocks Termination of Title 42: What You Need to Know 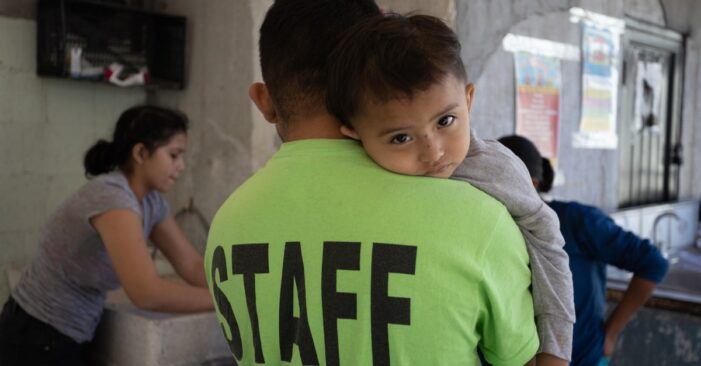 Juárez, Chihuahua, Mexico 03-20-2021 – 80 migrants, mostly Hondurans, live in the Good Samaritan shelter in Ciudad Juárez, they were expelled from the United States under title 42. (Shutterstock)

Just three days before Title 42 was set to end on May 23, a federal judge in Louisiana blocked the Centers for Disease Control and Prevention (CDC) from ending the controversial policy. With the court order in place, Title 42 is unlikely to be lifted for months, possibly years.

As a result, the border remains in a state of constant confusion, with a patchwork of different policies that affect migrants in inconsistent ways, driving up repeat border encounters and fueling human suffering.

Under Title 42, a CDC policy put in place in March 2020, border officials have carried out over 1.8 million “expulsions” of people after the crossed the U.S.-Mexico border. Many of these expulsions were of the same people crossing the border more than once. In total, nearly one out of every three border apprehensions over the last two years was a person caught on their second or higher failed attempt to cross the border.

The policy has been primarily applied to single adults , who have made up the majority of people crossing the border since Title 42 went into effect. It has also been used to a lesser extent on asylum seekers, with Central American families and Haitian nationals being the most vulnerable to expulsion. The ports of entry remain largely shut to people seeking asylum, forcing many to cross between ports instead if they want a chance at accessing the asylum process.

In response, a coalition of republican state attorneys general brought a lawsuit in Louisiana seeking to block the Biden administration from ending Title 42. A separate lawsuit was filed in Texas but has largely taken a backseat to the Louisiana lawsuit.

The states argued in their lawsuit that the Biden administration was not permitted to end the emergency Title 42 authority through the same means the order was put into place. Instead, the states argued that the Biden administration had to go through “notice and comment” rulemaking and was required to give the public the opportunity to weigh in on the attempted termination before restoring normal immigration law at the border. They made this argument even though the Trump-era CDC order putting Title 42 into place said it could be ended at any time.

The attorneys general also argued that the Biden administration’s decision to lift Title 42 was arbitrary and capricious and would unleash a surge of new migrants to the border, who would harm their states. Despite clear evidence that Title 42 has itself been responsible for a major increase in border crossings, the states said the Biden administration’s choice not to lift Title 42 without an alternate plan to turn away migrants was a recipe for disaster.

In his decision agreeing with the states, Judge Robert Summerhays of the Western District of Louisiana found that the states were likely to succeed on their claim that ending Title 42 is “rulemaking” and therefore requires the use of notice and comment. Under this rationale, the CDC can suspend all normal immigration laws in an emergency without any notice, but once the emergency has passed, the CDC is required to ask the public whether it should allow the Department of Homeland Security (DHS) to resume processing migrants under normal immigration laws.

Because he had found that the CDC went through the wrong procedure to end Title 42, Judge Summerhays did not rule on whether the decision was arbitrary and capricious.

Notice and comment rulemaking can be a lengthy process that will likely take the CDC months to carry out if it seeks to end Title 42 again. It requires the preparation of a formal “notice of proposed rulemaking,” a comment period of 30-60 days, agency review of all comments, the preparation of a final rule, review by the Office of Management and Budget, and then usually the final rule is delayed at least 30 days before going into effect. And even if the CDC were to go through this process, states in opposition to the policy change could simply sue again to block that new rule.

The Biden administration has already filed a notice of appeal, meaning it intends to seek review by the Fifth Circuit Court of Appeals. That court has been almost universally hostile to the Biden administration on a wide variety of topics, including immigration. As a result, the fate of Title 42 will likely go to the Supreme Court at some point next year.

Until then, the CDC will likely attempt to follow the court order and revoke Title 42 through notice and comment rulemaking. But unless something drastic happens, Title 42 is likely to remain in place well into 2023, blocking any real change at the border and keeping the dead hand of the Trump administration at the wheel.