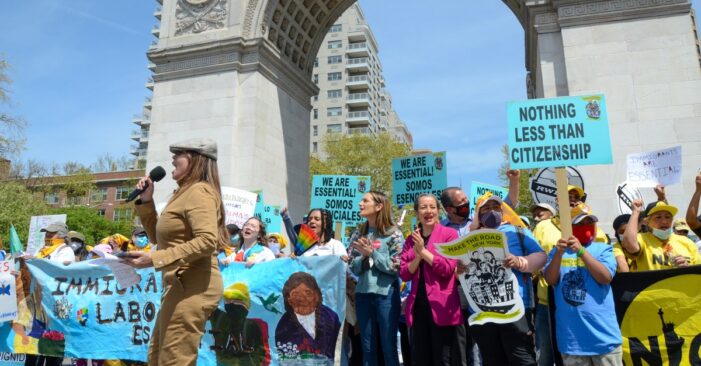 Hundreds of workers march to Foley Square in New York City to demand stronger worker protections and a full pathway to citizenship for immigrants on May 1, 2022. (Shutterstock)

Staten Island, NY – Today, the Our City, Our Vote coalition, a group of advocates fighting for expand access to the ballot box held a press conference alongside elected officials at the Richmond County Supreme Court ahead of the start of the legal proceedings around the lawsuit against the Our City, Our Vote law (Local Law 11-2022). Enacted in January, Local Law 11-2022 allows lawful permanent residents and persons authorized to work in the United States in New York City to participate in municipal elections beginning in 2023.

New Yorkers spoke about how Local Law 11 would empower immigrant communities by giving them a say in who represents them in local elections, while also denouncing the lawsuit as another instance of restricting voters’ access to the ballot box. With over 800,000 eligible residents, New York City would be the largest jurisdiction in the country to offer voting rights to its non-citizen residents.

Advocates also called on the Mayor and City Council to create a $25 million fund to be distributed to conduct truly expansive city-wide voter registration, voter education, and GOTV, while additionally increasing the budgets of the NYC Board of Elections (BOE) so that they may properly implement Local Law 11. The budget increase will allow the BOE to educate new voters of their rights, support voter registration and increase language access and translation services. Livestream of the event is linked here and photos and video are attached.

“Today’s court proceedings are yet another example of Republicans trying to disenfranchise Black and brown communities through misinformation and deception,” said Murad Awawdeh, New York Immigration Coalition Executive Director. “Local Law 11 would make it possible for immigrant New Yorkers who are active in their communities, work here, raise their children and pay taxes here to participate in their local democracy. They deserve to have the right to elect the individuals who represent their interests. When it’s all said and done, New York City’s immigrant communities will prevail.”

“We all benefit when everyone participates in local government,” said Susan Stamler, Executive Director of United Neighborhood Houses (UNH). “The more opportunities that exist to bring eligible voters into the system, the stronger our democracy grows. UNH fought for Local Law 11-2022 (the Our City, Our Vote law) because it will be transformational for the communities that settlement houses serve, opening the door for our neighbors who live and pay taxes here to shape how our city functions. We look forward to the court upholding this law so that we can hit the ground running with voter education and registration to reach the 800,000 New York City residents who now have the right to vote.”

“Many immigrant New Yorkers must navigate a nexus of compounding challenges including poverty, linguistic isolation, overcrowding, and inadequate service accessibility, yet historically have lacked access to the democratic systems that directly impact their lives,” said Rawaa Nancy Albilal, President & CEO of AAFSC. “As an agency that works to amplify the voices of underrepresented and underserved communities, Local Law 11 (Our City, Our Vote), community members with legal residency, established roots, and a long history of meaningful contributions to our society, can receive the representation they deserve. At a time when voting rights are experiencing critical threats across the nation, NYC must support greater civic engagement to ensure equitable political representation and investment in NYC’s diverse immigrant communities.”

“Asian residents across New York City have suffered continuous and increasing anti-Asian violence, the highest poverty rate of any racial group, and unnecessary institutional barriers to accessing social services,” said Jerry Vattamala, Director of the Democracy Program at the Asian American Legal Defense and Education Fund (AALDEF). “The Asian population in New York City grew the fastest of any racial group over the past decade, yet our community does not have the representation that it needs to address these integral community issues. Restoring voting rights to almost a million city residents is the right thing to do and must be defended by our communities.”

“New York City is a city of immigrants, and the Municipal Voting Law enfranchises immigrant New Yorkers, including Muslim Americans, and provides immigrants an opportunity to make their voices heard at the ballot box,” said Ahmed Mohamed, Legal Director at the New York chapter of the Council on American-Islamic Relations (CAIR-NY). “Local Law 11 should be celebrated by all democracy loving New Yorkers, and CAIR-NY looks forward to defending the right to vote for immigrant New Yorkers.”

“The Municipal Voting Law finally gives a voice in our local government to more than 800,000 New Yorkers,” said Fulvia Vargas de Leon, Associate Counsel at LatinoJustice PRLDEF. “As we stand for a representative and inclusive democracy, we must include those in our community who serve on the front lines of emergency services, raise their children here, and call this city home. Our fellow New Yorkers who have been newly enfranchised through this law deserve the right to exercise their vote to have a say in local matters that affect their lives. LatinoJustice PRLDEF will vigorously defend the law and ensure that the right and access to vote is not unjustly hampered for this new electorate.”

“Many of our neighbors in the communities we serve have been unable to vote on policies affecting their daily lives despite contributing to the city’s economic, cultural, and social expansion,” said Ben Thomases, Executive Director of Queens Community House. “Our City, Our Vote supports giving immigrants across Queens and the rest of New York City a voice in our democracy. All of our neighbors should have a say in how the City responds to the needs of the communities.”