DSNY Initiatives: The Dignity of a Clean-Living City 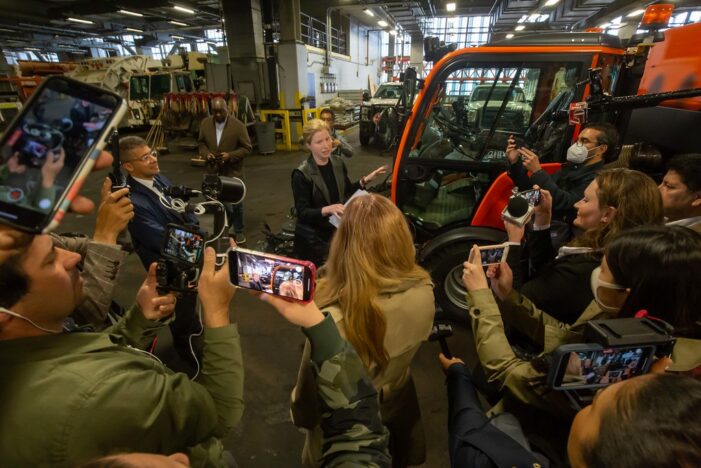 Department of Sanitation Commissioner Jessica Tisch takes the helm of one of the essential departments in New York City. Appointed by Mayor Eric Adams, Tisch began her work in city government nearly 15 years ago, where her first 12 were at the NYPD. Hired as an intelligence analyst, then worked her way up to being deputy commissioner of IT. She oversaw IT and all the technology at the Police Department, including 911 operations. Before being appointed as Commissioner of DSNY, Tisch was the Department of Information Technology and Telecommunications (DoITT) commissioner. She took on the role just weeks before the COVID-19 pandemic. Her two-year tenure at the DoITT included vaccinations, contact tracing, providing tablets for New York City school students, installing Wi-Fi in shelters, moving the city’s workforce to remote work, and adapting 311 as a vital point of contact for COVID-19 information.

Just a few weeks into her new role at DSNY, Tisch is rolling out multiple initiatives to try and clean up the city. Never an easy task, especially after a pandemic that caused trash to become a problem while the city was on lockdown. During the pandemic, many Department of Sanitation workers contracted COVID-19, and some lost their lives. The high rate of workers who contracted the virus led to a high sick leave rate among uniformed employees and missed collections.

Alternate Side Parking (ASP)
Giving New Yorkers a heads up, Tisch announced on her first day that she is reviving Alternate Side Parking (ASP) to pre-pandemic levels, effective July 5. ASP was suspended in March of 2020 by then-Mayor Bill De Blasio to try and keep New Yorkers from leaving their homes during the height of the pandemic. Parts of New York City continued to have ASP once a week, and this is why some would occasionally find citations on their windshields. Restarting ASP will cost the city $11 million. While the street sweeper, which Tisch calls “the most effective clean streets tool that we have in our arsenal,” will keep the streets clean, property owners are responsible for keeping their sidewalks and gutter areas clean. The gutter area extends 18 inches into the street. Funding was also approved for year-round street cleaning on protected bike lanes and other narrow infrastructure.

Containerization
It’s hard to believe that storing trash in bags was illegal forty years ago. One wonders what New York City sidewalks would look like without piles of those infamous black bags. Well, DSNY is collaborating with the Department of Transportation to try and make that a reality. Last month, the city’s first containerized waste bins began their pilot stage. These bins were placed in commercial districts to clean up city streets. Hoping to reduce the “convergence of rodents, improve aesthetics, and take back parts of the city streetscape currently overburdened by piles of trash.”

These two and many more projects are set to launch soon. While, in theory, these initiatives sound like they will benefit the city, it’s important to remember that New Yorkers have to do their part; recycle properly, avoid littering, and compost if possible. The DSNY, New York’s Strongest, “do so much more than clean the streets. They do more than make black bags disappear,” said Tisch. “They are public servants in the truest sense of the word, and they are part of the lifeblood of this city.”