Delta’s Surprise U.K. Comeback is a Warning Sign for the U.S. 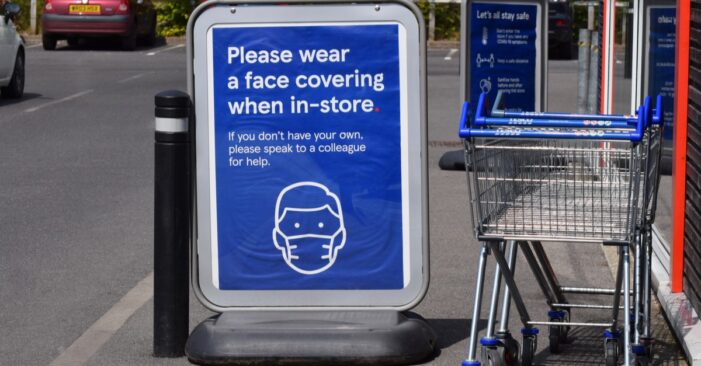 Again and again, the U.K. has previewed the next unwelcome phase of the pandemic. The highly transmissible Alpha variant was first identified in Kent. The even more infectious Delta variant originated in India but used Britain as its springboard to global domination. The U.K. was one of the earliest movers on vaccination — and one of the first to see uptake level off. It was also the first country to declare “freedom” from Delta, lifting nearly all restrictions soon after its summer surge appeared to crest.

“We [must] learn to live with, rather than cower from, this virus,” Health Secretary Sajid Javid tweeted in July.

The question is why — and whether Delta’s surprise U.K. comeback foreshadows another dark winter in the U.S.

“We are concerned,” Javid said Wednesday, predicting that new cases could surge to 100,000 a day. “Everyone is right to be concerned.”

It’s not all bad news for the Brits. For one thing, they’re testing at a higher rate than any other major country, so that’s part of the reason their case numbers are so elevated. They’ve also managed to fully vaccinate more than 95 percent of residents over 60 — by far the most vulnerable age group — which has broken some of the link between cases and deaths. Right now, new daily cases are three-quarters of the way to matching last winter’s all-time U.K. peak. Yet new daily deaths are just a tenth what they were then. That’s progress.

The U.S. has not done as well on that front. Many states here still have large pockets of unvaccinated seniors — and as a result, deaths and hospitalizations during this summer’s Delta wave were about as high as they were last winter, relative to cases. With safe and effective vaccines now widely available, that should no longer be happening. Similarly, the U.S. would be detecting far more cases if it nearly quadrupled its current rate of testing to match the U.K.

But the troubling thing about the U.K. is its trajectory. It’s a country that has fully vaccinated 80 percent of its eligible population and endured some of the world’s biggest waves of infection, yet the coronavirus is now spreading again at an alarming rate. Does that mean the U.S. — where 77 percent of the eligible population is vaccinated, where previous surges have presumably left behind a lot of natural immunity, and where cases have plummeted more than 50 percent over the last month — will suffer the same fate?

Not necessarily. But Delta’s U.K. comeback is a warning sign for the U.S.

Experts have floated several reasons for the resurgence. One could be waning immunity. The earlier you vaccinate your population, the earlier population-wide protection starts to taper off (particularly among seniors who were first in line); that’s why Israel, the fastest country out of the gate on vaccination, also suffered a massive Delta wave over the summer. The fact that the U.K. initially relied on vaccines from AstraZeneca (which offers less protection against Delta) and Pfizer (which has waned more than Moderna’s) probably isn’t helping.

Making matters worse, an estimated 43,000 people across the U.K. reportedly received incorrect negative test results due to “technical issues” at a private laboratory in Wolverhampton, allowing infections to keep spreading unchecked in the region. A new, possibly more infectious sub-lineage of Delta called AY.4.2 is also “on an increasing trajectory” across the country (though its role is unclear at this point).

On top of that, U.K. residents are “increasingly reporting catching Sars-CoV-2 for a second or even third time,” according to the Guardian. A year ago, reinfection seemed rare; only two dozen cases had been recorded worldwide. But just like protection from vaccination, natural immunity also seems to fade over time and in the face of new variants such as Delta. In Oklahoma, for instance, reinfections have risen 350 percent since May.

“With rising levels of Sars-CoV-2 infections in the U.K., many of us are personally aware of children and adults who got reinfected, sometimes after a relatively short period from their first infection,” Dr. Nisreen Alwan, a public health professor at the University of Southampton, told the Guardian. “We still don’t know much about the risk factors for reinfection but the theoretical assumption that once all the young get it the pandemic will be over is becoming increasingly unlikely.”

Meanwhile, the post-July rollbacks and messaging from U.K. leaders seem to have persuaded many Britons to stop taking precautions. About 15 percent of U.K. adults now say they never wear a mask in public spaces, according to a YouGov poll from mid-October — far more than in Spain and Italy (below 2 percent) or France (about 4 percent). The poll also found that Brits were less cautious about using public transportation, attending large gatherings, and entering crowded spaces than their European counterparts. In Italy, nightclubs limit capacity and require proof of vaccination; in Spain, they require masks. In England, clubs are operating without restrictions.

Amid these differences, COVID rates in the U.K. and its peer countries have sharply diverged. According to the Financial Times, “the UK’s weekly death rate [now] stands at 12 per million, three times the level of other major European nations, while hospitalizations have risen to eight Covid-related admissions a week per 100,000 people, six times the rate on the continent.” In other words, the gap between cases and serious outcomes may be bigger in the U.K. than before — but more COVID cases still means more hospitalizations and deaths.

“These small measures like mask-wearing, distancing, ventilation and an emphasis on homeworking are greater than the sum of their parts,” Martin McKee, professor of public health at the London School of Hygiene and Tropical Medicine, told the paper. “It really doesn’t take an awful lot to bring this down, as France, Italy and others have shown.”

And that may be especially true among younger people. Perhaps the biggest difference between the U.K. and its counterparts — including the U.S. — has been its lack of emphasis on vaccinating teens and slowing the spread of the virus in schools. Despite high-profile bans in red states such as Florida and Texas, masks are now required in about two-thirds of U.S. public schools, and a recent study found that schools without mask mandates were significantly more likely to experience a coronavirus outbreak than schools where everyone has to mask up. Quarantines are commonplace.

In contrast, no one in the U.K. under the age of 18 has to quarantine after contact with a positive virus case, regardless of vaccination status, and masks are not required for any students or staff. And while the U.S. started offering jabs to 12-to-15-year-olds in May, the U.K. waited until September — and even now, England (one of the nations that constitutes the U.K.) administers them solely through schools, which causes all kinds of logistical delays.

As a result, England’s teen vaccination rate is now less than half Spain’s, France’s, Italy’s or the United States’ — and U.K. infections are now “highest among secondary schoolchildren, with an estimated 8.1 percent of that group thought to have had COVID-19 during the week ending Oct. 9,” according to the Guardian.

And while most kids don’t get terribly sick, they do transmit the virus to others.

“If you don’t clamp down on prevalence [in schoolchildren], you’ll get the spread of infection and possibly reinfection, which will then potentially spread to parents whose vaccines may be waning, and more critically to grandparents and clinically vulnerable people,” Stephen Griffin, associate professor of virology at the University of Leeds, explained to the Guardian.

That appears to be the problem now vexing the U.K., leading to calls from experts to revive mitigation measures before winter comes — a move the British government said Wednesday it was not yet ready to make. “We are right on the edge — and it is the middle of October,” Matthew Taylor, chief executive of the health care system in England, Wales and Northern Ireland, warned this week. “It would require an incredible amount of luck for us not to find ourselves in the midst of a profound crisis over the next three months.”

To avoid a similar Delta comeback, the U.S. would be wise to heed Taylor’s warning. America is already doing some things right. Teen vaccinations continue apace. Boosters — which are rolling out more slowly than expected in the U.K. — may soon be available for Americans as young as 40. And the Biden administration is planning to introduce vaccines for children ages 5 to 11 later this month. Even then, Dr. Rochelle Walensky, director of the Centers for Disease Control and Prevention, indicated Wednesday that her agency will still recommend that all teachers, students and staff mask up at school.

“As we head into these winter months, we know we cannot be complacent,” Walensky said during a White House COVID briefing.

Fortunately, U.S. cases, deaths and hospitalizations are falling right now. But Delta’s U.K. resurgence is a reminder not to relax too soon. Even in a country with a higher overall vaccination rate and far more testing, the virus can still spiral out of control — especially if you let it spiral among young people first.