Could a Broken Heart Have Killed Husband of Slain Texas Teacher? 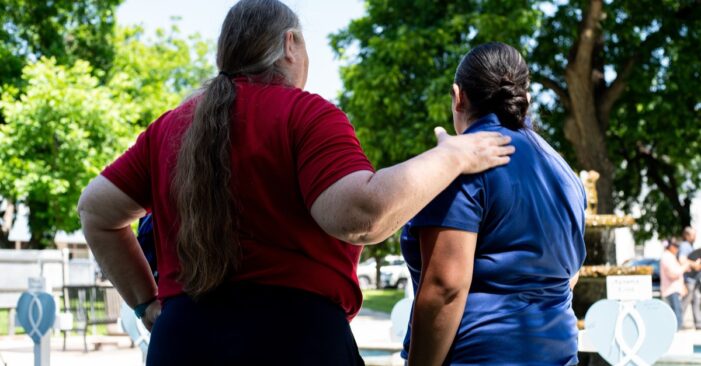 Uvalde, Texas – United States – May 26, 2022: Community members at the Robb Elementary School memorial pray, visit, and leave tokens of affection at the crosses dedicated to the victims of the shooting. (Shutterstock)

May 27, 2022 — In a seemingly endless stream of tragic news out of Uvalde, TX, the husband of a slain teacher died Thursday just after returning home from her memorial.

Irma Garcia was one of two teachers gunned down, along with 19 students, at Robb Elementary School Tuesday. Family members said Thursday that her husband and high school sweetheart, Joe, died of a broken heart.

“I truly believe Joe died of a broken heart and losing the love of his life of more than 25 years was too much to bear,” Irma’s cousin, Debra Austin, wrote on a GoFundMe page, that as of late Friday afternoon had raised more than $2.29 million.

Though the exact cause of Joe Garcia’s death is unclear, death by broken heart isn’t some hyperbolic myth perpetuated by books and movies. Not only is it real, but doctors say it is on the rise.

Broken heart syndrome, known medically as takotsubo cardiomyopathy or stress-induced cardiomyopathy, can occur when someone has experienced extreme stress – including, but not limited to, the loss of someone near and dear.

Most cases of broken heart syndrome occur in women – about 88% — usually during post-menopausal years.

Symptoms mimic those of a classic heart attack: sudden, severe chest pain, and shortness of breath. But unlike a heart attack, broken heart syndrome usually does not involve blocked coronary arteries or permanent heart damage. Rather, the extreme amount of stress sends the heart into a state of shock, which then suppresses the heart muscle from squeezing properly, says Tracy Stevens, MD, a cardiologist at Saint Luke’s Mid America Heart Institute in Kansas City.

“Adrenaline is released by the adrenal gland, and then binds to receptors and can cause this severe fight or flight response,” Stevens says. “We are seeing more of it over the last few years, possibly because with the pandemic, we are seeing stress at levels in this country that we’ve not seen before.”

Though there is no research on pandemic-related stressors and a possible rise in cases, a 2021 study published in the Journal of the American Heart Association found that between 2006 and 2017, the diagnosis of broken heart syndrome increased at least 6 to 10 times more rapidly for women in the 50-to-74 age group than in any other group.

It is possible for the condition to be fatal, but tends to be less deadly than a heart attack, with a mortality rate of only about 2%, saysAbhijeet Dhoble, MD, associate professor of cardiovascular medicine at University of Texas Health Science Center’s McGovern Medical School.

Stress can be a trigger for both, Dhoble says. But a heart attack comes with an underlying cause, while broken heart syndrome is induced only by stress.

Doctors often discover a patient has suffered a stress-induced episode rather than a heart attack upon seeing the heart’s left ventricle, its main pumping chamber, Dhoble says. In these cases, the left ventricle develops a narrow neck and round bottom, taking on the shape of an octopus pot – an apparatus used by fisherman in Japan called takotsubo.

“It follows acute stress in people’s life, anywhere from losing a job to losing a family member,” Dhoble says. “It can be fatal, but usually it’s reversible.”

To treat broken heart syndrome, doctors usually administer blood pressure medications and blood thinners, with a recovery time that can take up to a week.

“Surprise, acute loss, or even acute physical strain can lead to changes in the heart,” she says. “It’s definitely something we’re seeing more often.”