Legislation is part of an ongoing, multi-pronged effort by the City Council to combat maternal mortality and morbidity in NYC, especially among communities of color 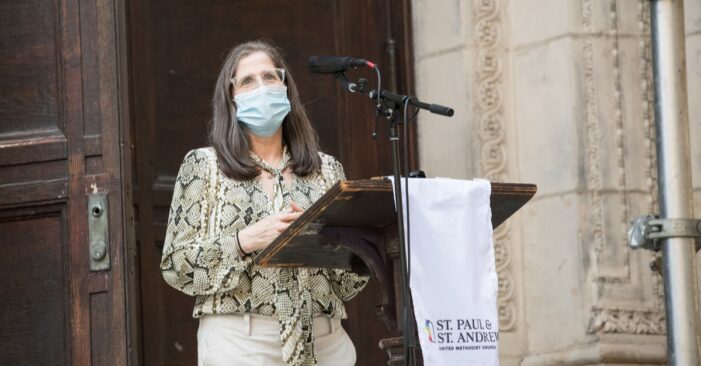 Intro 1209 will be one of the first local laws in the U.S. to mandate free, comprehensive, and ongoing doula services in a correctional system, where the doulas will be paid for by the local government.

“By increasing critical maternal health services for people incarcerated on Rikers Island, we are fighting to ensure a better future for them and their families,” said Council Member Helen Rosenthal.”Mandating these services is part of an ongoing, multi-pronged effort by the City Council to combat maternal mortality and morbidity in NYC, especially among communities of color.”

Intro 1209 will require that the services of two doulas be provided to people being held in Rikers Island’s Rose M. Singer Center twice per week. The doulas will work with incarcerated people on a variety of health issues pertaining to pregnancy and birth, as well as assisting people who have lost custody of their children or have other family concerns.

Several hundred people –both those who are incarcerated and their families– could benefit annually from access to these services.

One of the inspirations for the bill was a 2017 report by Ancient Song Doula Services regarding their work with incarcerated people on Rikers. They found that the doulas were incredibly helpful to both people experiencing incarceration and their families.

Why is this law necessary?

Incarcerated people who are pregnant or have recently given birth are highly vulnerable and often lack access to proper medical and mental health care. If you are incarcerated and Black or Latinx, you are even more at risk.  An analysis of 2006-2010 data found that Black women in New York City are 12 times more likely to die from pregnancy-related causes than white women.

Countless scientific trials examining doula care have shown that doulas have a positive impact on the well-being of the entire family, remarkably improving physical and psychological outcomes for both mother and baby. Doula organizations have long been able to point to dramatically improved health outcomes for their patients.

There is also a troubling lack of data regarding maternal health among women in prisons and jails across the United States. The legislation passed today will help to address this issue in New York City by establishing new reporting requirements.

“Doula services for incarcerated women are a health care right. As the women are prevented from seeking the care they need, our prisons should provide the care to them — this is a justice lens response. The prison industry spends tons of money, yet continues to deny the right of incarcerated women to seek the quality of care required to support healthy birth outcomes. This short-sightedness also imprisons their offspring, potentially creating health risks for the next generation as well,” said Ngozi Moses, Executive Director, Brooklyn Perinatal Network.

“Council Member Rosenthal’s legislation is not only humane, but it will also reduce future public healthcare spending. These women are at much higher risk than the general population for poor perinatal health and birth outcomes. Doula services, aligned with other wrap-around coordinated care to address health issues created by confinement, can help to mitigate the risk of poor health outcomes for both mother and baby. The benefits of this approach will be lifelong,” Moses continued.

“As we move forward with closing Rikers and ensuring that its replacement is not a shiny new replica it is essential to pass legislation like Intro 1209. While we ultimately do not want to see anyone who is pregnant detained, this is an important step forward to changing current conditions for birthing people. For far too long birthing people on Rikers have been denied the specialty care they are entitled to. By increasing access to maternal health services, people have the opportunity to gain an essential support system and an on-site advocate that will not only support them physically but emotionally as they experience their birthing journey,” said Jordyn Rosenthal MSW, Director of Community Engagement at the Women’s Community Justice Association.

In 2018, the City Council overwhelmingly passed two pieces of birth justice legislation introduced by Council Member Rosenthal. Her first bill required the City’s Dept of Health to create a plan ensuring that any pregnant person in New York City can have access to a doula. See this FAQ sheet to learn more.

A second bill codified the Maternal Mortality & Morbidity Review Committee (M3RC), established in 2017 by the Dept of Health. The M3RC is a multidisciplinary group charged with examining every individual instance of maternal mortality to evaluate how such deaths can be prevented in the future. Council Member Rosenthal’s bill also requires the Dept of Health to report on additional factors linked to maternal health outcomes including race; access to prenatal care and doulas; and economic, civic, and social well-being.