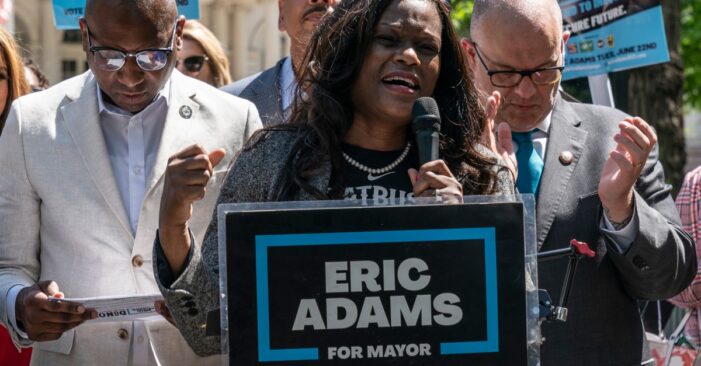 “While Haitian migrants continue to face an uncertain future, it is imperative we continue to work with CBOs who have been leaders in helping this community,” said J. Phillip Thompson, Deputy Mayor for Strategic Policy Initiatives. “I am looking forward to how this partnership will help expand the City’s reach to the Haitian community and connect them to critical resources for their resettlement process.”

“This investment is part of the City’s continued commitment in responding to Haiti’s compounding crises over the past few months,” said Raquel Batista, Commissioner of the Mayor’s Office of Immigrant Affairs. “We are excited to work with CBOs staffed by Haitian New Yorkers, and located immediately within our City’s Haitian communities, who provide daily support and services to their fellow community members including those who have recently resettled in New York City.”

“As a proud Haitian immigrant, I understand the importance of prioritizing the needs of Haitian asylum seekers,” said MagalieDesroches Austin, Senior Advisor and Director of the Mayor’s Office of Minority and Women-Owned Business Enterprises. “I am glad to see the administration supporting Haitian resettlement services through Haitian-run CBOs and hope that more municipalities follow New York City’s lead.”

The funds will be distributed to community-based partners that will provide linguistically- and culturally responsive case management and immigration legal services to newly arrived Haitian New Yorkers. Case managers will work with newly arrived Haitians to determine eligibility for benefits and connect them to resources and services.

Legal services will include assistance in accessing Temporary Protected Status (TPS) and other humanitarian forms of relief, removal and deportation defense, and immigration legal services capacity-building among local CBOs and pro bono attorneys. Efforts will also include an anti-fraud and information messaging campaign across community & ethnic media.

In recent months, there has been a heavy increase in Haitian arrivals to the U.S. due in part to natural disasters and political upheaval in Haiti. Many of these new arrivals have resettled in the state of New York, which has the second-largest population of foreign-born Haitians in the United States.

This investment will provide the supports needed so that community-based partners can help address the critical and social service needs of newly arrived Haitians and better understand additional challenges anticipated over the coming months.

The following organizations will receive funding to provide case management, legal, and language services, building upon the work they have been conducting since the migrant influx began:

The Haitian Studies Institute of CUNY Brooklyn College will partner with MOIA, and all involved in the initiative to ensure services and public messages are delivered in a culturally and linguistically responsive manner.

“After traveling across several miles and months to seek refuge in the U.S., thousands of Haitian New Yorkers need critical resources and supportive services to recover from the emotional, mental and physical toll of this ordeal. The allocation of $1.5 million towards trusted community-based organizations will be instrumental in bolstering the extraordinary work already underway to empower, equip, and engage these families. We are removing societal barriers to legal assistance and social services by working together to ensure that our newest neighbors have a fighting chance to remain in the U.S., where they can pursue new opportunities and no longer have to live in fear. I want to thank Mayor Bill de Blasio, MOIA Commissioner Raquel Batista, and Pastor A.R. Bernard for their support in expanding access to much-needed assistance. I met many migrants in Del Rio, TX, who shared their traumatic experiences with our small delegation of community leaders and service providers from Brooklyn. While we were on the ground, we saw firsthand the mistreatment they endured. Now is the time for us to come together as a city of immigrants – in faith and love – to take the necessary action and help one another,” said Council Member Farah N. Louis.

“By providing aid to displaced Haitians who have settled in New York, the Mayor’s Office of Immigrant Affairs is demonstrating a commitment not only to racial justice but to human rights. Immigrants built our nation, and by ensuring they have the resources needed to resettle, we are investing in the future success of our city and state. I look forward to partnering with the organization selected by MOIA and thank the Mayor for his continued commitment to making our city more just and equitable in our recovery,” said Assembly Member Bichotte Hermelyn.

“I applaud The Mayor’s office for allocating funds to ensure we support Haitians seeking refuge in this city. I join advocates and elected officials in supporting this call to provide Temporary Protected Status for Haitians living in the United States and other needed services. We must work to protect our Haitian community,” said Senator Kevin Parker.

“Catholic Charities is excited to partner with the Mayor’s Office of Immigrant Affairs on the Haitian Response Initiative, which brings much-needed outreach and legal assistance to New York City’s Haitian families, children, and workers, as well as many others, especially those recently resettled here from our southern borders.  This innovative program will bring together the cultural, legal pro bono, and capacity building and public education experts in our Haitian communities who are ready to help migrants seeking protection and safe haven,” said Mario Russell, Director of Immigrant and Refugee Services of Catholic Charities Community Services. “For hundreds of years New York City has been at the center of this nation’s welcome in dignity and respect to immigrants in need; we are pleased to continue this tradition today through the Haitian Response Initiative, as we know it will be part of what builds this City and a more just and compassionate society.”

“We are delighted to partner with MOIA to make a difference in the lives of our Haitian people in this great community.  It is essential to ensure dignity and equity to this vital ethnic group during this time of crisis,” said PorezLuxama, Executive Director of Life of Hope. “Our doors are open, and this initiative will help ensure a safe and productive future for these families.  We thank MOIA for their consideration and look forward to continuing our partnership through our future Life of Hope Center.”

“On behalf of HCC (Haitian Centers Centers, Inc.), I applaud the effort of MOIA Commissioner Raquel Batista to grant Haitian organizations in her endeavors to help Haitian migrants fleeing atrocious conditions from their motherland,” said Andre Peck, Executive Director of the Haitian American Community Coalition. “HCC, with over 39 years of existence servicing a large Haitian population welcomes this opportunity to support and help the migrants navigate their many difficulties in their quest for survival.”

“HAUP is grateful for the financial support from MOIA, which will allow HAUP to dedicate a full staff person to respond to the needs of our newly arrived brothers and sisters from the border,” said Elsie Saint Louis, Executive Director of Haitian Americans United for Progress (HAUP). “We look forward to continued collaboration with MOIA and our sister community-based organizations”

“The Haitian migrant community will be supported during a most challenging time. Together with a cohort of experienced organizations, we look forward to providing direct services in assisting in whatever way possible,” said Carine Jocelyn, Chief Executive Officer of the Diaspora Community Service. “Thank you to the Mayor’s Office of Immigrant Affairs for coordinating this process.”

“Haitian families who entered at the US-Mexico border have faced a long treacherous route, where many of them suffered layers of trauma. This city funding is a step in mitigating the harm caused by racist federal immigration policies that re-traumatize them by denying work authorization and social services, and keeping them in fear of deportation,” saidNinaj Raoul, Executive Director of Haitian Women for Haitian Refugees. “While we are working for more humane immigration policies, we appreciate the initial funding to provide immediate support to newly arrived Haitian families.”

“The pandemic has highlighted the critical needs of immigrant students and their families and English Language Learners in NYC.  Newcomer Haitian students in the public schools need long-term investment, academic and social-emotional support to succeed. We are thankful that The City is responding to the needs of the community,” said Darnell Benoit, Director of the Flanbwayan Haitian Literacy Project.

“Haitian families have already faced unimaginable traumas in both their home country and in their journey towards asylum here in the U.S.,” says Murad Awawdeh, Executive Director, New York Immigration Coalition. “This funding couldn’t come at a more critical time to support these families to integrate more fully into the city but also to find the safety, stability, and community they so desperately need. We thank the Mayor’s Office for Immigrant Affairs for recognizing and meeting the needs of newcomer Haitian families to New York City, especially because our federal immigration system continues to fail them and so many other asylum seekers.”