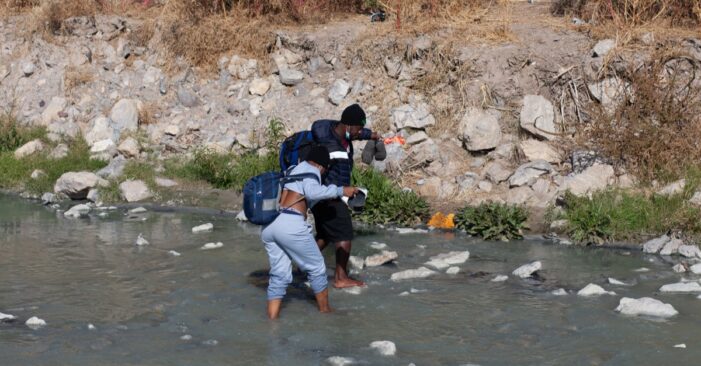 As a result of the investigation, four Border Patrol agents have been notified that they face disciplinary measures, according to senior CBP officials, who declined to talk about what those measures entail, citing an ongoing internal review and appeals process.

The probe concluded that miscommunication prompted a Border Patrol supervisor to authorize a horse patrol unit to help Texas officials stop migrants from entering the U.S. through the Rio Grande, despite CBP’s policy at the time of allowing migrants to retrieve supplies in Mexico and return to Texas across the river, the senior agency officials said during a call with reporters.

A CBP disciplinary board has proposed a 7-day suspension for the U.S. Border Patrol supervisor who instructed horse patrol agents to proceed in assisting Texas officials with their request for assistance near the Rio Grande, according to officials familiar with the findings.

Some agents, the CBP officials said, improperly threatened migrants and attempted to force them back into the river, an action that would violate U.S. law, which requires authorities to process migrants before deporting them or allowing them to stay. The migrants, investigators said, were not threatening agents and some were carrying tickets provided by U.S. officials that should have assured them safe passage.

The probe focused on the conduct of a handful of mounted Border Patrol agents in Del Rio in mid-September, when thousands of Haitian migrants suddenly arrived in the remote border region, forcing U.S. immigration officials to set up a makeshift processing site underneath an international bridge.

“As a result of a lack of command, control, and communication, (horse patrol unit) personnel carried out an operation at the request of (Texas Department of Public Safety) which directly contravened (U.S. Border Patrol) operational objectives and resulted in the unnecessary use of force against migrants who were attempting to reenter the United States with food,” the investigation’s 511-page report said.

The CBP investigation did not find evidence that mounted agents struck anyone with their reins, contradicting claims by some advocates and Democrats that migrants had been whipped, the senior agency officials said, requesting anonymity to discuss the probe before the public release of the report.

“It is important to know that whips are not part of border patrol training or equipment,” CBP Commissioner Chris Magnus stated emphatically during a press briefing Friday. “Likewise, investigators determined that the agents involved in the Del Rio activity were not carrying whips.”

The commissioner did note at least one agent involved in the incident reported twirling his horse’s reins as a “distancing tactic.” A review of CBP training documents “did not reveal any specific guidance on twirling of the reins for any purpose,” according to Magnus.

In one video, a mounted U.S. border agent was heard telling a migrant man who huddled with a group of women and children, “This is why your country’s sh**, because you use your women for this.” The agent repeatedly tried to impede the man’s path.

The CBP investigation found the agent who yelled at the migrant acted in an unprofessional manner. The same agent, investigators said, also acted unsafely by chasing a migrant with his horse, which nearly hit a child.

Even though the request went against CBP’s policy to allow migrants free passage, a Border Patrol supervisor instructed a unit of mounted agents who had been deployed from Carrizo Springs, Texas, to help state officials attempt to stop the entry of migrants. The supervisor told investigators he issued the authorization due to lack of guidance from his own supervisors.

The instruction led mounted agents to confront migrants near the river while attempting to stop their entry; though none of the migrants were forcibly returned to Mexico, the investigation found. Several confrontations ensued, investigators added, including the instance in which an agent yelled profanity at a migrant and another in which an agent grabbed a migrant and spun him around.

Roughly 30 minutes into the confrontations, a Border Patrol agent made a radio call seeking guidance and was told to allow the migrants free passage across the river.

The videos and photos of the incidents in Del Rio provoked swift condemnation from advocates for asylum-seekers, Democratic lawmakers and senior Biden administration officials, including President Biden, Vice President Kamala Harris and Homeland Security Secretary Alejandro Mayorkas, who ordered an investigation into the agents’ conduct.

According to senior CBP officials, the agency initially treated the incident as a criminal matter, referring it to the U.S. Attorney’s Office for the Western District of Texas on Sept. 29. Nearly six months later, on March 11, prosecutors declined to pursue criminal charges.

Senior CBP officials conceded the months-long lag prevented investigators from interviewing the U.S. border agents directly involved in the incident until after the U.S. attorney’s office issued its determination.

Magnus told CBS News during Friday’s press conference that he is “not happy about the length of time” the investigation took. “And part of the frustration, obviously, is the time that it took for the U.S. attorney to make their decision about ultimately declining to issue any criminal charges related to the investigation. That was a little over five months.”

While senior CBP officials declined to make a formal public announcement, CBP’s Disciplinary Review Board — charged with carrying out a parallel disciplinary review — shared its proposal with the implicated U.S. Border Patrol agents on Thursday.

No firings were recommended, officials familiar with the findings told CBS News. Attorneys for the four U.S. Border Patrol officers will be granted 10 days to respond to disciplinary proposals and provide additional evidence if they believe disciplinary actions are not warranted.

Once agents have the chance to respond to the Disciplinary Review Board, a senior executive service officer from CBP will make a final determination on whether the agents will be disciplined or exonerated, according to officials familiar with the process. It’s possible that CBP could exonerate the agents if they agree with the agents’ appeal of the Review Board’s proposals. If CBP upholds or mitigates disciplinary actions, agents may also take their case to an independent third party for review.

According to CBP’s latest report on Internal Investigations and Employee Accountability, the agency carried out more than 4,100 disciplinary actions in fiscal year 2020. Still, only 86 staff members were removed, while 120 were placed on probationary termination. A total of 1,042 employees received “reprimands” while 2,112 were granted counseling in fiscal year 2020.

CBP has routinely come under fire for failing to take disciplinary action. The slow pace of its internal probe into Del Rio mounted officers drew bipartisan outrage at the agency’s prolonged investigation.

In addition to issuing recommendations for disciplinary action, the 511-page review by CBP’s Office of Professional Responsibility (OPR) also proposed a slew of agency-wide reforms including improved command and control, an audit of horse patrol training policies and crowd control tactics, stronger leadership and management accountability measures and the standardization of the agency’s communication assets.

According to senior CBP officials, investigators’ fact-finding mission was hampered by a lack of access to communications during the incident. Officials said law enforcement communications took place on a radio frequency that was not recorded by the agency.

In an interview, Border Patrol Chief Raul Ortiz told investigators he deployed the Carrizo Springs horse patrol to the Del Rio sector to ensure the safety of agents and migrants. According to investigators, Ortiz acknowledged that there was an inadequate command structure at the time and accepted responsibility.

Migrants were not interviewed as part of CBP’s investigation, though agency officials said attorneys representing 11 asylum-seekers involved in the incident were consulted.

More than 17,000 Haitian migrants entered U.S. custody along the Mexican border last September, a monthly record for that nationality, CBP data show. While it has allowed some Haitians to stay and seek asylum in the U.S., the Biden administration responded to the sharp increase in border arrivals by launching a massive deportation campaign to Haiti.

Since the deportation operation started in September, the U.S. has used a public health law known as Title 42 to expel more than 18,000 Haitians without processing their asylum claims, according to the government data.

Overall, U.S. border officials have processed roughly 80,000 Haitians since September, some of whom left South American nations like Chile and Brazil after years of living there. Others started their journey directly from Haiti, which has continued to battle extreme poverty, natural disasters and political turmoil.

Probed on whether the agency would consider phasing out its use of horse patrol units, Magnus called them “a very important part of the Border Patrol’s work.”

“They have to do their work in very rough terrain in areas where a horse may be the only way they can access someone in distress.”