“It seems that there is no difference between Democrats and Republicans,” says Fernando Garcia, director of the Border Network for Human Rights in El Paso, Texas. 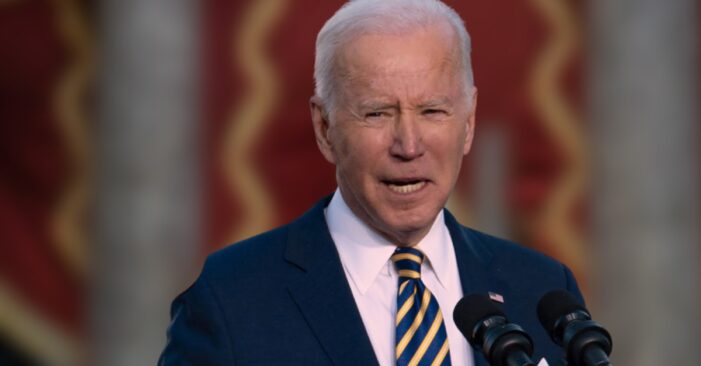 Moments after he was sworn into office, President Joe Biden made good on the first of dozens of promises he had made to immigrant communities on the campaign trail—bursting out of the gate with the repeal of some of the Trump administration’s most aggressively anti-immigration policies and the introduction of a vast legislative package that would create a path to citizenship for 8 million people living in the United States.

On that day, Biden looked to his pro-immigration supporters to be exceeding their highest expectations.

“President Biden delivered on day one,” said Krish O’Mara Vignarajah, president and CEO of Lutheran Immigration and Refugee Service. “It was a strong signal that this was a new and different administration.”

It took six more days for the first of those promises to be broken.

The decision to maintain the Department of Homeland Security’s extensive contracts with private prison companies, breaking a key campaign promise to end the practice, is now seen by advocates as the first indication that Biden’s record on immigration issues would be, at best, varied—and at its worst a continuation of policies they had just spent four years fighting.

“That was very symbolic—it was very revealing,” said Fernando Garcia, director of the Border Network for Human Rights in El Paso, Texas. “The fact that they did not include it gave us the indication that these announcements were goodwill announcements, but in practice, things were not changing.”

In practice, Garcia continued, “it seems that there is no difference between Democrats and Republicans.”

One year into his first term, civil rights leaders, immigration attorneys, legal advocacy organizations and grassroots groups are increasingly frustrated with what they see as the administration turning its back on many of the commitments that Biden made to them before his election.

“A year into President Biden’s term, immigrant communities are still suffering under harmful policies of the Trump administration Biden had campaigned on ending,” said Karen Tumlin, founder and director of the Justice Action Center. From the continued enforcement of the Title 42 order blocking asylum seekers in the name of public health to the broadening of the Migrant Protection Protocols and the mistreatment of Haitian migrants at the southern border, Tumlin said, “we are left unclear on what President Biden’s stance on immigration even is.”

But one lesson that immigrant-rights advocates learned during the Trump administration was how truly vast and powerful the executive branch’s authority is on immigration. Biden’s refusal to exercise those powers on a host of policies, Juliana Macedo do Nascimento, the senior advocacy manager of United We Dream, told The Daily Beast, shows a lack of political willpower that feels almost like betrayal.

“One year ago, we all held so much hope for the future of U.S. asylum policies toward families and others seeking safety at our borders. Today, we feel profound disappointment.”
— Katharina Obser, director of the Migrant Rights and Justice program at the Women’s Refugee Commission

“This administration is afraid of being challenged in the courts, it’s afraid of any Republican backlash when it comes to the border, and so it’s afraid of taking big steps to protect immigrants because they don’t want their power to be challenged,” do Nascimento said. “But if they don’t flex their power, then what’s the point of having it?”

Meanwhile, supporters of former President Donald Trump’s draconian immigration policies have watched with pleasure as Biden has failed to deconstruct much of the vast anti-immigration apparatus that Trump built—and, in some instances, has even expanded upon it. Trump-era senior White House policy adviser Stephen Miller, who longtime associates widely describe as having the heart of a far-right internet troll, has expressed some smirking satisfaction over the past year in how much of his immigration-policy architecture has endured, and how lax the Biden administration has been at chipping away at it, according to two sources familiar with the matter.

“I’ve definitely heard him crack some jokes about it,” one of these people recalled.

Of more than a dozen immigrant-rights advocates who spoke with The Daily Beast, every one said that the president’s first-year record on immigration issues revealed a mixed bag of enormous strides forward and infuriating backsliding.

“They did notch some some notable wins and accomplishments in critical areas very early on,” said Jorge Loweree, director of policy at the American Immigration Council, noting the immediate rescission of the so-called “Muslim ban” by executive order and the redirection of federal funds that had been diverted to fund Trump’s border wall.

Some of the frustration from the president’s supporters is normal in the first year of any administration, when lofty and ambitious campaign commitments come into conflict with the nuts-and-bolts mechanics of governance. Given the vanishingly thin Democratic majorities in the House and Senate, many of the president’s promises on immigration were always going to be a tall order—particularly the expansive U.S. Citizenship Act of 2021, which has languished in Congress since the day it was introduced a year ago.

Biden’s immigration policies began with a bang, from the deconstruction of the ban on immigrants from majority-Muslim countries and the introduction of the U.S. Citizenship Act to the beginning of the arduous process of reuniting families that had been separated under the Trump administration’s “zero tolerance” immigration policies. According to the Migration Policy Institute, the Biden administration has taken 296 executive actions on immigration, compared to the Trump administration’s 86 executive actions over the same period.

Those actions have led to concrete improvements in the immigration system, said Jessica Bolter of the Migration Policy Center.

“Much of the oxygen in terms of public perception of the Biden administration’s immigration record has been taken up by challenges at the border and stalled efforts in Congress to legalize unauthorized immigrants in the U.S.,” Bolter told The Daily Beast. “But the Biden administration has made major changes, particularly in how it conducts immigration enforcement inside the U.S. and in extending legal protections to vulnerable populations.”

Changes in enforcement guidances have cut the average number of monthly detentions resulting from arrests by U.S. Immigration and Customs Enforcement (ICE) in half; more than 420,000 people have become eligible for Temporary Protected Status following expansion of the program. In the first five months of 2021, the average monthly approval rate for asylum claims in immigration courts grew from a meager 30 percent to nearly half.

“Two things are true here: one, the Biden administration is making a lot of really important changes and improvements,” noted Ali Noorani, executive director of the National Immigration Forum. “And two, the most egregious immigration precedents set by Trump have been the most vexing to reverse.”

But the continued enforcement of Title 42, renewed contracts for private detention centers and the expansion of the Migrant Protection Protocols to include citizens of every country in the Western Hemisphere—it was originally limited only to Spanish speakers—have bewildered advocates. After all, the bitterest lesson learned during the Trump administration was how vast the executive branch’s powers are on immigration. Biden’s refusal to exercise them on a host of policies, said Katharina Obser, director of the Migrant Rights and Justice program at the Women’s Refugee Commission, shows a lack of political willpower that feels like a betrayal.

“One year ago, we all held so much hope for the future of U.S. asylum policies toward families and others seeking safety at our borders,” said Obser. “Today, we feel profound disappointment.”

A White House spokesperson pushed back on the notion that Biden has failed to deliver on key promises relating to immigration, telling The Daily Beast that the administration has made those promises a reality “from Day One.”

“Protecting DACA recipients, ending the Muslim ban and the public charge rule, putting together the Family Reunification Taskforce, re-starting the Central American Minors program that the previous Administration ended, extending or newly designating Temporary Protected Status for a number of countries, and working with DHS to give clear guidance for internal enforcement, among others,” the spokesperson listed. “The president has made clear that restoring order, fairness, and humanity to our immigration system are priorities for this administration.”

The sense of gloom among these activists and policy wonks, who have been pushing the Biden administration for the past twelve months on undoing Trump’s belligerently nativist legacy, is fueled in part by the cavernous gap between Biden’s promises and the results so far.

Alex Nowrasteh, an immigration policy analyst at the libertarian Cato Institute, has had his fair share of policy disagreements with Biden and progressives over the years. However, on U.S. immigration issues, Nowrasteh believed that Biden’s platform in 2020 was “the most pro-immigration platform of any presidential candidate since Abraham Lincoln,” the Cato analyst said on Wednesday, the day before the one-year anniversary of Biden’s inauguration.

But that, of course, was Candidate Biden, not President Biden.

“Now, we are incredibly disappointed with his record so far in trying to accomplish the goals he set out to accomplish. I wouldn’t call it a complete failure, but he has massively underperformed our expectations,” Nowrasteh added. “My Cato colleagues and I have been in touch with Biden administration officials, and we’ve discussed our concerns over current immigration policy and efforts to move in the direction that the administration wants to move. But government policy moves slowly, and these are still in the works.”

One of the reasons Nowrasteh thinks the sitting president is having difficulty unraveling his predecessor’s policies is that Biden doesn’t have his own Stephen Miller, as Trump did at his side.

“Miller, was arguably the most effective single bureaucrat in the last 50-60 years in the United States. He largely even exceeded Trump’s promises to curtail legal immigration,” Nowrasteh said. “But now, there isn’t a pro-immigration Stephen Miller. There isn’t someone to get on the phone 50 times a day to yell at officials telling them to get their act together.”

For his part, Miller, who did not respond to requests for comment on this story, has regularly appeared on Fox News and conservative media ever since Biden assumed the presidency, inveighing against the Democratic president’s immigration and southern-border policies. He has gone as far as to denounce some of these policies as an “impeachable offense,” and bemoaned reversals of the Trump agenda.

“Every person I talk to in the administration is committed to doing the right thing, and is trying to do the right thing,” Nowrasteh continued. “But I don’t know if any of them could be [their own] version of Stephen Miller. And I just don’t see it right now.”

Advocates don’t see the situation getting any better soon. With a 1.5 million-person backlog in the immigration court system and direct evidence that Congress will play no role in passing immigration reform, Garcia said, it’s hard to see a way for Biden to deliver on the promises he has yet to keep.

“A year into the presidency we still have policies implemented by Trump at the board that have not changed,” Garcia said. “They have fallen short in terms of their promises, but I would also question how seriously they actually treat the issue of immigration as a priority for them.”