Biden is Facing Another Major Immigration Decision. The White House is Still Weighing What to Do. 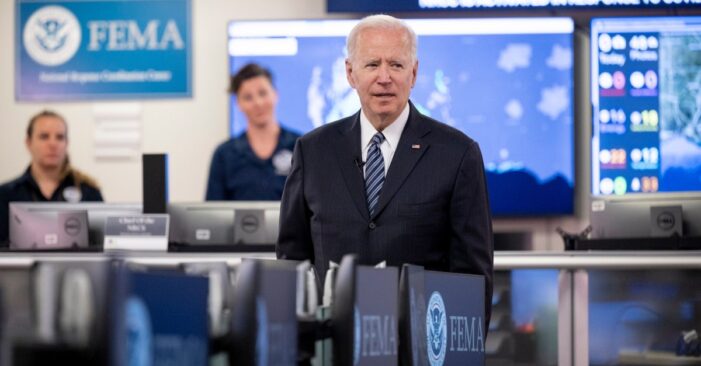 The Biden administration is facing a major deadline to decide the fate of hundreds of thousands of Venezuelan exiles living in the United States.

But with days to go for a decision, officials are still torn, juggling the benefits it could have on their political standing in Florida and the potential it brings to worsen the migrant buildup on the U.S. southern border.

At issue is whether to extend Temporary Protected Status for Venezuelan immigrants already in the U.S. The administration has until Monday to make its decision. It also is considering whether to expand the protections to an estimated 250,000 Venezuelans who have arrived in the U.S. after TPS was granted last year in March and therefore not eligible for the temporary legal status.

Officials are wary of redesignating TPS to apply to more Venezuelans, according to people familiar with the internal deliberations. The concern inside the White House, the people said, is that doing so will incentivize more migration at a time the administration is struggling to manage the logistical challenges and optics of record numbers of migrants arriving at the border, especially ahead of the midterm elections.

Still, immigrant advocates, Democratic lawmakers and Florida-based Latino leaders are urging the administration to redesignate Temporary Protected Status for Venezuelans who have fled the humanitarian crisis brought on by Nicolás Maduro’s government. They also are pushing for an 18-month renewal of protections for those currently with TPS.

“I have experienced the White House as often being timid on issues of immigration and issues that they think pull or invite more people to the border, but this is a no brainer,” said Lorella Praeli, co-president of the progressive Community Change Action. “You don’t get elected to act from a place of fear. You get elected to lead and be decisive.”

The administration must publish a Federal Register notice by Monday — 60 days before the current designation expires Sept. 9 — to indicate if it will extend TPS for current holders and redesignate the protections for Venezuelans who have moved to the U.S. within the last year.

The White House referred questions on TPS to Homeland Security. DHS did not respond to a request for comment.

When the Biden administration first announced it would grant TPS to Venezuelan exiles, it fulfilled one of the president’s long-standing campaign promises. TPS provides people from countries struck by natural disasters, armed conflicts or other “extraordinary” conditions the ability to work in the U.S. without fear of deportation.

U.S. Citizenship and Immigration Services estimates 323,000 Venezuelans were eligible for TPS last year. About 240,000 Venezuelans have applied for TPS, but a majority are awaiting approval due to a backlog in processing applications.

Democratic leaders and advocates tracking the issue widely expect the administration will renew the protections for those who were already present in the U.S. when the original designation was announced and registration began on March 9, 2021. But they’re still making a public push ahead of Monday’s deadline for the administration to expand the protections to more Venezuelans.

“As the future of the Venezuelan people hangs in the balance, the United States’ next steps are pivotal. Re-designating and extending TPS for Venezuelans would not only send an unmistakable signal of support to the victims of the Maduro regime’s repression, but to the world that we will match our words with action,” Sen. Bob Menendez, the New Jersey Democratic chairman of the Foreign Relations Committee, said in a statement to POLITICO.

One concern the administration is weighing is how expanding eligibility to more recently-arrived Venezuelans might affect migration to the southern border. But advocates and Democrats closely tracking the issue dismiss the concern, saying the dire situation in Venezuela and the surrounding region will lead migrants to continue making the trek regardless of TPS redesignation.

Venezuela’s ongoing humanitarian, economic and political crisis has only worsened in the year since the Biden administration took office. And more than 6 million refugees and migrants have left the country as a result, according to the United Nations.

Nearly 100,000 Venezuelan migrants have been apprehended at the U.S. southern border in fiscal 2022, according to U.S. Customs and Border Protection figures. Most are allowed to remain in the U.S. since the country has limited ability to send people back to a country that, under Maduro, is not recognized as legitimate. Earlier this year, Biden officials began deporting some Venezuelan migrants to Colombia.

Democrats and advocates argue that redesignation and renewal of TPS offers clear political benefits ahead of the midterms in Florida. The long-time battleground state is home to a majority of Venezuelans living in the U.S. It also has a huge concentration of other Latin American exiles who fled dictatorships and leftist violence. Politically, these Democrats say, Biden could help slow the gains Republicans have made in South Florida in recent years.

Already, a bipartisan group of Florida lawmakers, including South Florida GOP Reps. Mario Diaz-Balart and Maria Elvira Salazar, have urged the Biden administration to extend and redesignate Venezuela for TPS. They specifically asked for the required arrival date to be moved from March 9 to Dec. 31, 2021.

“At a time when our southern border is facing unprecedented numbers of illegal crossings, making changes to the cutoff would pose an added burden to an already backlogged system,” a Rubio spokeswoman said in a statement to POLITICO.

In anticipation of Biden’s decision, the Florida Immigrant Coalition on Thursday launched a five-figure digital ad campaign thanking him for granting TPS and urging him to expand it. The ad, first shared with POLITICO, will target Floridians in Central and South Florida.

In recent weeks, dozens of Florida Democratic state lawmakers and national, state and local organizations have written to Biden and Homeland Security Secretary Alejandro Mayorkas urging for the redesignation and renewal.

“It’s really important for the U.S. to step up… and demonstrate the regional leadership we are expecting other countries to exhibit — especially after the recent Summit of the Americas,” said Sergio Gonzales, executive director of the Immigration Hub, reminding that Biden thanked other countries in the region for taking in migrants. “It’s the right thing to do.”