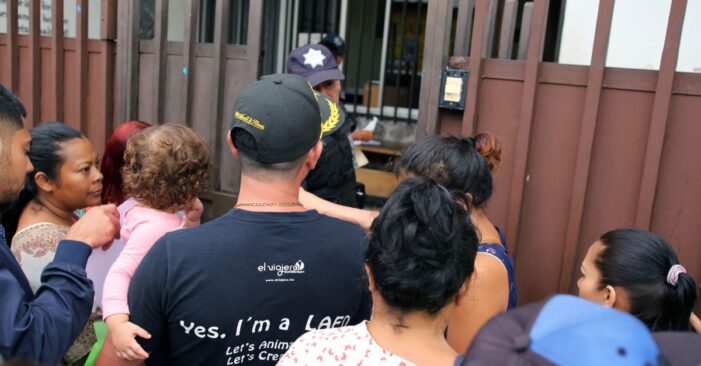 Tapachula, Chiapas/Mexico – May 15, 2019: A group of Central American migrants speak with a Federal Police officer at the National Institute of Migration. (Shutterstock)

The directive, issued to all U.S. Immigration and Customs Enforcement (ICE) employees, also calls for previously deported immigrants outside the United States to be allowed back into the country on a temporary basis for child custody hearings.

Biden, a Democrat, has promised a more humane and orderly approach to immigration than his Republican predecessor, but has faced large numbers of migrant arrests at the U.S.-Mexico border. The new ICE directive replaces Trump-era guidance issued in 2017 that did not explicitly require officers to inquire about and record parental status or guardianship.

In another departure from the Trump-era policy, the new guidance applies to parents or guardians of incapacitated adults as well as children.

ICE Acting Director Tae Johnson said in an email to staff that the agency is “committed to safeguarding the integrity of our immigration system and preserving the parental and guardianship interests of noncitizen parents and legal guardians.”

ICE, immigrants in the U.S., Immigration and Customs Enforcement (ICE)