Immigrant advocates and Democratic leaders pressed the Biden administration to swiftly end “Remain in Mexico” after a ruling cleared the path — at least temporarily — to do so. 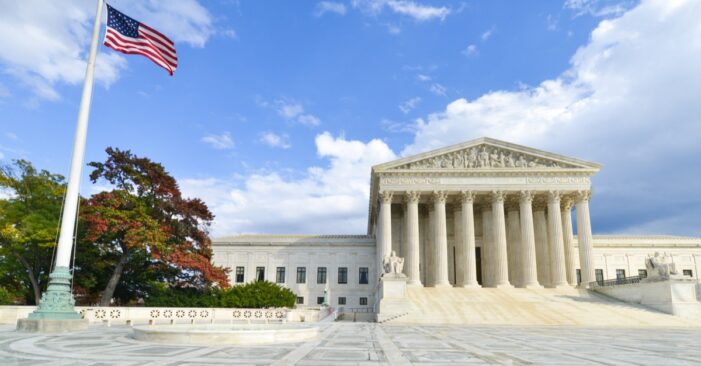 President Joe Biden’s immigration agenda got a rare win Thursday — but the Supreme Court’s ruling on “Remain in Mexico” served as a reminder to many Democrats and advocates of just how many more immigration battles remain unresolved.

The court’s 5-4 decision notes the Biden administration has the discretion to end the program. The Department of Homeland Security issued a statement saying it welcomed the decision and would “continue our efforts to terminate the program as soon as legally permissible.” The White House did not comment on the ruling.

Immigrant advocates and some Democratic lawmakers applauded the decision, which arrived amid continued challenges for the Biden administration, such as ongoing legal battles brought on by GOP-led states and a lack of appetite for immigration reform on Capitol Hill. And many are waiting for Biden to further deliver on his promises to reverse restrictive border policies imposed by his predecessor.

“We certainly would hope and expect that the administration does move swiftly to end that program and to make sure asylum-seekers who have been trapped in these very dangerous circumstances quickly have an avenue to be admitted to the U.S. to have their cases processed,” said Sergio Gonzales, executive director of the Immigration Hub and former senior policy adviser to then-Sen. Kamala Harris.

The court’s ruling Thursday leaves the door open for Republican-governed states to again challenge the termination of the program, formally known as the Migrant Protection Protocols, or MPP, under different grounds in lower courts.

Still, immigrant advocates and Democratic leaders called for Biden to quickly and completely end the program, which forces asylum-seekers to wait in Mexico as their cases proceed in U.S. immigration courts.

They also cautioned the Biden administration against letting the ruling distract it from taking steps to end other Trump-era border policies, particularly the public health directive known as Title 42. A federal judge last month blocked the White House from lifting the restriction, which the Trump administration imposed at the start of the pandemic.

The Justice Department has appealed the Title 42 decision, but immigration lawyers say Biden officials could be doing more, namely starting a public comment process, to address the substance of the judge’s order. The judge found that the administration failed to comply with the law because it failed to post a Federal Register notice that requested comments about its plans to end the use of Title 42.

In its statement Thursday on the MPP ruling, DHS specifically noted it “continues to enforce our immigration laws at the border and administer consequences for those who enter unlawfully, and will continue the court-mandated enforcement of the Centers for Disease Control and Prevention’s Title 42 public health order.”

In the leadup to Thursday’s decision, Biden administration officials have largely avoided the “Remain in Mexico” case and not made mention of how they would respond to a ruling, despite a late June decision being widely anticipated, according to several Hill aides and immigrant advocates in touch with the White House.

Biden officials made no mention of the coming MPP ruling in a weekly call with Hill immigration staffers on June 24 or in the weeks prior, according to a Senate Democratic aide. Another Democratic aide said administration officials have generally avoided talking about immigration, particularly after Democrats on the Hill split over the administration’s previous attempts to lift Title 42.

Ahead of the MPP ruling, one senior administration official said plans for responding to it were the responsibility of Homeland Security.

“This is an area where DHS is following the rulings of the court and for the rest of us, we’re waiting to see how the legal process plays out as we are continuing to cooperate very closely with the Mexicans on migration issues writ large,” the senior official said.

In the ruling, the majority opinion specifically said a DHS memo issued in October to end MPP “constituted final agency action.” In that memo, Homeland Security Secretary Alejandro Mayorkas said the termination of the program “will be implemented as soon as practicable after a final judicial decision to vacate the Texas injunction.”

On the Hill, some Democratic lawmakers pushed for expediency.

“I urge the Biden administration to do everything in its power to swiftly end ‘Remain in Mexico’ once and for all,” Sen. Alex Padilla said in a statement. “Misguided and inhumane Trump-era policies like ‘Remain in Mexico’ and Title 42 have only decimated an already broken immigration system.”

Sen. Bob Menendez (D-N.J.) also emphasized the need to end Title 42 in his statement on Thursday’s ruling. He called “on all Democrats to stand united against a failed policy that erodes our border security by incentivizing human smugglers.” And Rep. Joaquin Castro (D-Texas) called on the administration to “move swiftly” to terminate the program and “establish a legal framework to unwind Title 42.”

Several immigrant advocates noted that even if the administration moves quickly to end the “Remain in Mexico” program, thousands of migrants will still be turned away from the U.S. border without being allowed to seek asylum because Title 42 remains in place.

In May, 1,460 migrants were returned to Mexico through MPP, according to DHS figures. That same month, more than 100,000 migrants were expelled using Title 42.

“The real problem at the border now is that the Title 42 policy remains in place and is subjecting countless asylum seekers to unspeakable harms. Regrettably, the White House seems fine leaving Title 42 in place despite the horrific consequences for desperate asylum seekers,” said Lee Gelernt, the ACLU’s lead attorney in challenges to the policy.

Meanwhile, Congress remains unlikely and unable to reach any kind of immigration deal that would have enough votes to pass the Senate, a sore point for some Democrats who have for years been vocal in pressing for immigration reform.

“We breathed a sigh of relief when the Biden administration took the reins because he doesn’t use the language to demonize and dehumanize immigrants [that Trump did] but we’ve got to deliver,” said Rep. Chuy Garcia (D-Ill.).

Garcia added that it has been disappointing to see some of his Democratic colleagues in the Senate “walk back on their campaign promises by changing course on policies like Title 42.”

Part of the challenge, Democratic lawmakers and aides say, is that they don’t all have the same views on how to tackle immigration policy, particularly when it comes to migrants arriving at the U.S. southern border.

“I think some of the moderate Democrats understand the importance of Title 42 but then you have some people on the far left that surely don’t agree with that and that’s where the conflict comes in,” said Rep. Henry Cuellar, a moderate Texas border Democrat who narrowly beat a progressive in a primary runoff election.

Cuellar said he supports keeping both “Remain in Mexico” and Title 42 in place “as long as we provide safety to those migrants,” a viewpoint that puts him at odds with many in his party. However, there have been widespread reports since the start of the program of kidnappings, violence and sexual assault as migrants await in border towns for their hearings.

Advocates have expressed frustration at the administration and Democrats for not being more proactive in fighting Republican messaging, which has largely portrayed the border as chaos and railed against offering undocumented immigrants protections.

“You have a Republican Party that is constantly hammering the administration and Democrats on immigration,” Gonzales said. “Unfortunately, you have a lot of silence when it comes to Democrats on this issue. That’s not a good strategy — and we’re running out of time as we get closer and closer to November.”