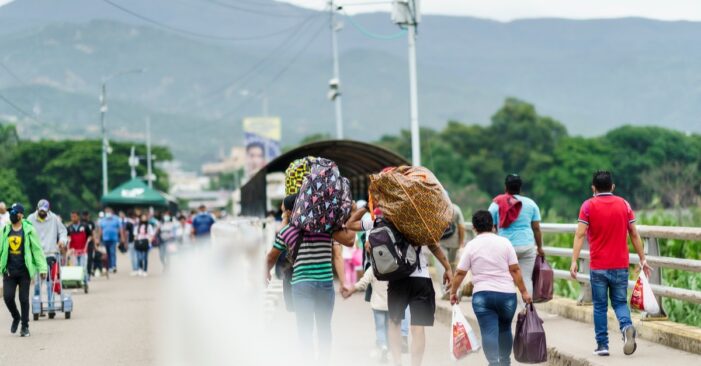 There were lots of Venezuelans crossing the border into the land of Colombia. This was captured on 61222 in La Parada, Colombia. (Shutterstock)

Federal immigration officials on Monday extended a set of temporary protections for Venezuelans who entered the United States before March 2021, but chose not to offer protection to more recent migrants, amid economic tumult in Venezuela and pressure to expand the program from Democratic lawmakers and some Florida Republicans.

KEY FACTS
The Department of Homeland Security said Venezuelans who migrated by last spring will be eligible for temporary protected status—which allows them to avoid deportation and get permission to work, regardless of U.S. immigration status—until at least March 2024, an 18-month extension from the previous September 2022 expiration date.

DHS estimates about 343,000 Venezuelans are eligible for this status, though many people who applied after it was first offered in March 2021 are stuck in a backlog.

The agency decided not to expand protections to include Venezuelan migrants who entered the United States after March 2021, an idea favored by dozens of congressional Democrats as well as Republicans like Rep. Mario Diaz-Balart (Fla.).

BIG NUMBER
143,561. That’s how many Venezuelan citizens were apprehended at the U.S.-Mexico border from March 2021 to May 2022. Many Venezuelans who entered the U.S. without authorization have reportedly been able to stay in the country because deportations to Venezuela—whose government is at odds with the United States—are often difficult, though some Venezuelans have been sent to third countries like Colombia.

KEY BACKGROUND
Migration from Venezuela to the United States has spiked in the last two years, with nearly 50,000 Venezuelan citizens arrested at the southern border in the 2021 fiscal year, a massive jump from around 1,200 in 2020. This surge comes as millions of people flee Venezuela due to economic turmoil, political upheaval and widespread allegations of human rights abuses under the government of President Nicolas Maduro, whom the United States doesn’t recognize as Venezuela’s ruler following a contentious 2018 election. President Joe Biden offered temporary protected status to Venezuelans who were already in the U.S. shortly after entering office, which was seen as a way of ramping up pressure on Maduro’s government. The move was backed by immigration advocates as well as Diaz-Balart, Sen. Marco Rubio (R-Fla.) and other Democratic and Republican politicians from Florida, where Venezuelan Americans are an important part of the electorate. In recent months, advocates have pushed the Biden Administration to also offer protections to Venezuelan migrants who arrived in the U.S. more recently, but administration officials were concerned the idea could exacerbate a wider surge of U.S.-Mexico border crossings over the last year, Politico reported.

CHIEF CRITIC
A group of 22 congressional Democrats, including Sens. Dick Durbin (Ill.) and Robert Menendez (N.J.), penned an open letter last week arguing Venezuelan migrants who arrived after March 2021 should also get protection. “Denying access to [temporary protected status] will not serve as an effective deterrent to future border crossings,” they wrote. “It will simply ensure that Venezuelans will live in poverty in the United States, with no other options.”

TANGENT
People from more than a dozen other countries are also eligible for temporary protected status in the U.S., including Haiti, El Salvador and Yemen. The program is designed to give temporary relief to migrants whose countries are ravaged by civil war, natural disasters or other extreme circumstances. The Biden Administration has expanded the program to countries like Afghanistan, Ukraine and Myanmar, a shift from former President Donald Trump, who sought to end temporary protected status for some countries.