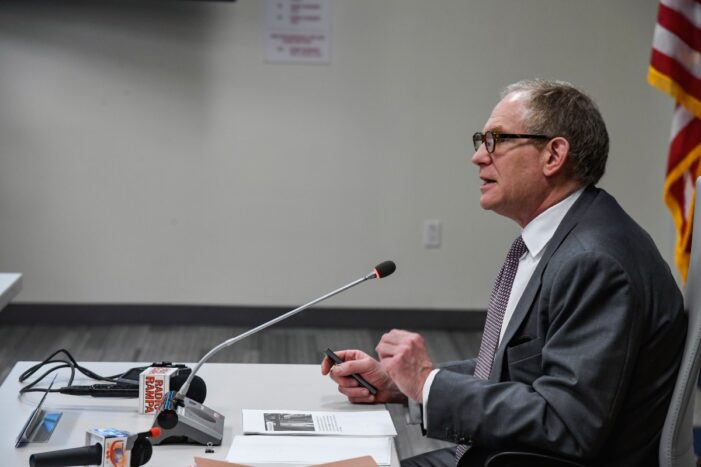 As the COVID-19 pandemic forced New York City into a lockdown, it became a risk, not only to people but to businesses and services, such as the MTA. Two years ago, during the pandemic, the MTA carried only about 10% of its regular riders. Now, the MTA has more than five million riders a day systemwide. This is according to Janno Lieber, MTA Chairman and CEO. “Transit is not just moving people around,” said Lieber. “It’s a connection to jobs, education, and economic opportunity seven days a week, 24 hours a day.” The MTA is on a balanced budget. Due to a $6 billion in covid relief funds secured by Sen. Chuck Schumer from the US Department of Transportation, the money has helped transit leaders avoid fare increases, service cuts, and layoffs. Despite the increase in riders, Lieber says there is still a long way to prevent a multi-million-dollar deficit by the end of 2025.

Focusing on Buses
MTA is joining forces with Mayor Adams to double the number of dedicated bus lanes. The proposal is to build 150 miles of new bus lanes over the following four years, adding 140 miles of current routes. As cars, dollar cabs, vans, and many other obstructions cause buses to slow and cause delays. On top of that, they plan to increase camera enforcement, saying that their effectiveness reflects “the first-time people get a ticket for driving in the bus lane only one out of five ever do it again and only less than one out of 10 get a third ticket.”
There is plenty of focus on Queens, with the “fewest subway lines for the most people,” said Lieber. A plan to redesign outdated bus routes will be discussed in 14 virtual public hearings that Queens residents are encouraged to attend.

Improvements and Projects
Speaking on big and small projects, Lieber highlighted a few projects completed during the pandemic. Projects such as the Americans with Disabilities Act (ADA) and upgrades in different stations. The 42nd St Connection project, the original and oldest subway system that opened in 1904, had its tracks extended to make it less crowded and an entrance on the Times Square side for easier access. The L Train Project was completed on April 26, 2020, ahead of schedule, $100 million under budget, and without having to shut it down. According to Lieber, it had tunnel rehabilitation, increased station capacity, and accessibility improvements.

Megaprojects include East Side Access, the largest capital project for Long Island Rail Road riders with 40 miles of new tracks, a new terminal beneath Grand Central, and the LIRR expansion project. Two of a few other megaprojects aim to increase job opportunities for commuters.

Transit Fares
By 2024, MetroCard will be phased out and replaced by OMNY, a contactless payment introduced in 2019. Ridders can use their smartphone, smartwatch, credit/debit card with a microchip, or prepaid ONMY card, which can be reloaded after a one-time purchase and expire after seven years. Fare capping will also be part of ONMY, like the weekly unlimited MetroCard, but without paying upfront, a ridder gets capped out after spending $33 or 12 rides over seven days.

The Fair Fares program is an underused and helpful program for those who qualify. “We have almost a million people in this city who would qualify for this, but only a couple of 100,000 uses it,” said Lieber. The website shows 271,026 new Yorkers have currently enrolled. They are focusing on assisting low-income New Yorkers with their transportation costs.

Prioritizing Safety
All this was great news, but all seems fruitless when buses and trains are not safe. Lieber spoke on increased police visibility on trains and platforms and more security cameras that help catch the “bad guys.” But only a few days later, a gunman detonated a smoke bomb and opened fire, hitting ten people on the Manhattan-bound N train as they began their day. New Yorkers began to question the effectiveness of the increase of police and security cameras after the shooting. Like always, mental health was brought up for debate as it’s evident that anyone who commits such an act needs help. Mayor Adams called for an increase in psychiatric services.

With public transportation challenges and incidents like the recent shooting, it’s hard to believe things will improve. Lieber, who spent 14 years working on rebuilding the World Trade Center, thinks of himself as an optimist, “I believe in New York. I really believe it’s always getting better, he said. “One must find that optimism deep within, and many New Yorkers find it every morning and at the end of every shift before they catch that train or bus.” Lieber added.