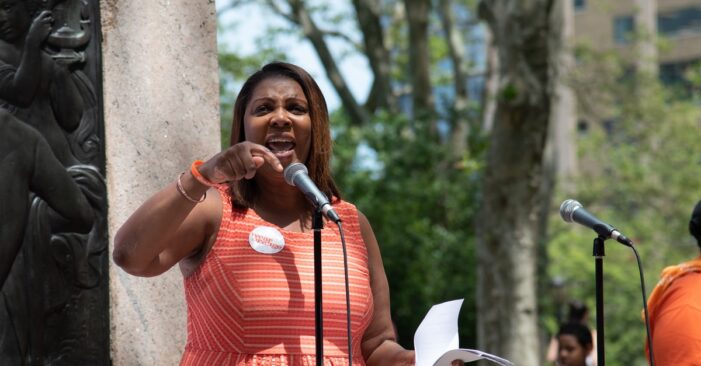 NEW YORK – New York Attorney General Letitia James today announced an agreement in her lawsuit against Chestnut Holdings of New York, Inc. (Chestnut Holdings), a property management corporation, over its failures to protect children from lead paint hazards in New York City. The lawsuit, filed in February 2020, alleged that Chestnut Holdings put the health of its tenants, primarily children, at risk by repeatedly violating New York City’s lead poisoning prevention laws, which require landlords to take critical measures to prevent children under 6 years old from being exposed to paint with dangerously high levels of lead. Chestnut Holdings will pay $300,000 to the Office of the Attorney General (OAG) for initiatives to protect children from lead poisoning and ensure that all of its more than 6,000 apartments throughout New York City are in full compliance with the law.

“Every New Yorker — especially children living in our most disadvantaged communities — has a right to live a healthy life without the threat of lead paint poisoning,” said Attorney General James. “As a landlord to thousands of children and families, Chestnut failed to safeguard its tenants, but, today, we are ensuring their health will be protected moving forward. I will continue to do everything within my power to uphold our lead laws and hold landlords accountable for exposing our communities to serious and irreversible harms.”

“As a part of LeadFreeNYC, HPD is committed to keeping children safe from lead through enhanced enforcement, education, and resources for property owners to make good on their obligations,” said New York City Department of Housing Preservation and Development Commissioner Louise Carroll. “We will continue to pursue enforcement through our own litigation and with partners like the attorney general, who utilize the work of our inspectors and lead-based paint enforcement teams to identify and audit buildings where lead-based paint regulations are not followed. I hope this settlement serves to let all property owners know how seriously HPD and the attorney general take lead-based paint compliance and encourages them to find out more about how to properly comply.”

The agreement was jointly filed by Attorney General James and the New York City Department of Housing Preservation and Development (HPD) in the Supreme Court of New York, Bronx County for final approval. Any future violation of the law by Chestnut Holdings will violate the agreement and subject the company to possible legal action by the OAG.

Chestnut Holdings manages more than 6,000 apartments in approximately 134 buildings, most of which are located predominantly in low-income communities of color in the Bronx. The OAG’s investigation into Chestnut began in 2018 and determined that the company engaged in repeated violations of the Childhood Lead Poisoning Prevention Act, including failing to inspect apartments to determine if a child under 6 years of age lives there, failing to conduct complete annual investigations of apartments for hazards that are conducive to lead poisoning, and failing to take the necessary measures when an apartment turns over. Additionally, Chestnut Holdings repeatedly certified, in new leases, that it had complied with the Childhood Lead Poisoning Prevention Act’s turnover requirements, even though it had not done so.

Lead is a highly toxic metal that can cause serious and irreversible adverse health effects. Children who have been exposed to even very low levels of lead are at risk for neurological and physical problems during critical stages of early development. In fact, no safe lead level in children has been identified. Children under 6 years of age are more likely to be exposed to lead than any other age group, as their normal behaviors could result in them chewing lead paint chips; breathing in or swallowing dust from old lead paint that gets on floors, window sills, and hands; and can be found in soil, toys, and other consumer products. Lead poisoning in New York City is highest among children of color and children living in high-poverty neighborhoods; low-income children represent 66 percent, and Asian, Black, and Latino children represent 84 percent, of children under 6 in the city with elevated lead levels.

Lead paint in residential housing has been a pervasive problem for decades, particularly in New York. Beginning in the 20th century, paint with dangerously high levels of lead was used on both exterior and interior surfaces of housing in the United States. Lead paint has been found in approximately 43 percent of all of New York dwellings. In 1960, New York City prohibited the sale of paint with high levels of lead for residential use, New York state imposed a state-wide ban in 1970, and the federal government banned lead in paint in 1978. The vast majority of older, painted buildings contain some paint with lead levels higher than these bans allow. The New York City Childhood Lead Poisoning Prevention Act requires owners of apartments and houses built before 1960 to take critical safety measures to prevent lead poisoning in children tenants.

Chestnut Holdings will also pay $300,000 to the OAG to fund projects that help protect children from lead poisoning. The penalty amount is based on the extent of violations determined through the OAG’s investigation.

This is the second major action that Attorney General James has taken in the past week to hold landlords accountable for failing to comply with New York City’s lead paint laws. Last week, she reached a pre-suit agreement with A&E Holdings to ensure that children living in its NYC apartments are protected from dangerous lead-based paint.

“Some of the worst landlords in our city put the health and safety of New Yorkers at risk to protect their own profits, and Chestnut Holdings is near the top of my office’s list,” said New York City Public Advocate Jumaane Williams. “I thank the attorney general for pursuing justice and reaching this settlement on behalf of tenants who have faced dangerous conditions as a result of Chestnut Holdings’ negligence, and am glad to see that, as a result, more children and families can be protected against hazards in their homes.”

“I applaud Attorney General Letitia James for having taken infamous Bronx-based landlord Chestnut Holding to task and reached a settlement agreement that will make them fully comply with our city’s existing childhood lead poisoning prevention laws,” said State Senator Gustavo Rivera. “This should serve as a warning to other landlords that they will be held accountable for neglecting health hazards in homes of children and families in New York City and across the state.”

“I applaud Attorney General James and her office for their vigilance in pursuing landlords who fail to comply with the Lead Poisoning Prevention Act. This kind of enforcement is an important aspect of our state’s larger efforts to ensure that all New Yorkers have access to high-quality, safe, and affordable housing,” said State Senator Brian Kavanagh. “Lead poisoning persists as one of the most prevalent and preventable environmental diseases in New York, with thousands of children having blood lead levels above the Centers for Disease Control and Prevention’s reference value. Hopefully, legal actions like this one will send a message to others who might choose to ignore lead poisoning prevention laws that such behavior will not be tolerated. I look forward to continuing to work with the attorney general and our colleagues at all levels of government, to prevent these types of abuses going forward.”

“Access to safe housing is a human right. Exposure to lead poisoning can have long-lasting health consequences, especially on our children,” said State Senator Alessandra Biaggi. “No New Yorker should be exposed to the dangers of lead poisoning due to the negligence of their landlord. I want to thank Attorney General Letitia James for holding landlords accountable and ensuring all New Yorkers have access to safe, lead-free homes.”

“Chestnut Holdings, which owns dozens of buildings in the Bronx, including at least seven in my own district, failed to uphold their obligations to provide safe and decent housing for their tenants,” said State Assemblymember Jeffrey Dinowitz. “They failed to ensure that my constituents and New Yorkers across the city were living in homes that were free of lead paint and, in doing so, put hundreds, if not thousands, of families at risk of lead poisoning. This is unacceptable, and I am very proud of Attorney General Letitia James for her work to hold Chestnut Holdings accountable.”

“Many of my Bronx constituents have been exposed to dangerously high levels of lead paint in their homes, putting young children at risk,” said State Assemblymember Kenny Burgos. “It is wrong and unacceptable. I applaud Attorney General James for taking swift action to hold landlords and management companies accountable that put their tenants at risk. All New Yorkers deserve to live in a safe and healthy home, and this is a great step in ensuring that our tenants are protected from lead exposure.”

“Lead is a serious public health issue that, if not properly addressed, can lead to life altering medical complications for young children and families living in New York City,” said New York City Council Member Vanessa Gibson. “I want to thank Attorney General Letitia James and her staff for taking swift action to hold our landlords accountable, and for ensuring they are in compliance with the Childhood Lead Poisoning Prevention Act. Protecting the health and safety of our tenants should always be our number one priority.”

“Attorney General Letitia James deserves high praise for this important victory protecting New Yorkers against lead poisoning,” said New York City Council Member Robert Cornegy. “Too many suffer from a lifetime of avoidable debilities here in New York City. This settlement shows that victories against lead poisoning are not only possible, but imperative. We must build on the attorney general’s work to make sure everyone is safe from this avoidable neurotoxin.”

“It is great justice that Chestnut Holdings is being held accountable for their actions, that primarily affected families in the Bronx,” said New York City Council Member Eric Dinowitz. “Lead poisoning is devastating for a child’s future health, and I applaud Attorney General James for taking swift measures to ensure this never happens again.”

“These settlement agreements are showing landlords who have generally acted autonomously for decades that they can no longer ignore their duty and continue to put the health and safety of our communities at risk,” said New York City Council Member Oswald Feliz. “I thank our attorney general for putting our children first and ensuring that a message is sent to all landlords, that neglectful and dangerous behavior will no longer be accepted.”

“Not only is New York Attorney General Letitia James holding criminally negligent landlords accountable for putting the health of our children at risk, but she is also using funds from these fines to protect other children from toxic lead poisoning,” said Sonal Jessel, policy director, WE ACT for Environmental Justice. “Lead poisoning is completely preventable, and the city has plenty of laws on the books but they are rarely enforced. This is extremely troubling for Black/African American communities because we know from national studies that Black children living below the poverty line are twice as likely to suffer from lead poisoning as poor white children. New York City has a major child lead poisoning problem, with a rate of 11.2 per 1,000 children living in private housing having elevated blood lead levels.”

Attorney General James is continuing to pursue legal actions across New York to end the scourge of childhood lead poisoning by holding accountable landlords that allow lead paint-related hazards to proliferate in low-income rental properties. In September 2020, she sued a group of Buffalo individuals and companies for repeated violations of city, county, state, and federal laws by illegally allowing lead paint-related hazards to proliferate in their rental properties.