Anna ‘Delvey’ Sorokin Sequestering in ICE Custody: ‘I Don’t See a Reason Why I Should Be Banned Forever’ 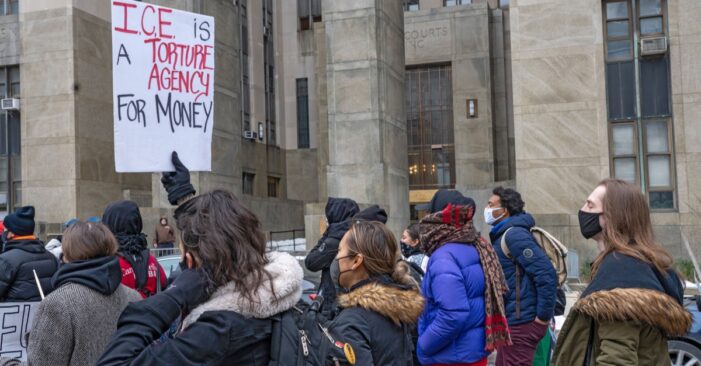 Demonstrators call to “Free Them All” during an Abolish ICE (Immigration and Customs Enforcement) protest for Javier Maradiaga on February 15, 2021 in New York City. (Shutterstock)

Anna Sorokin, who convinced New York City’s elite that she was a German heiress by the name of Anna Delvey in 2017, is sequestering in Immigration and Customs Enforcement (ICE) custody at the Orange County Correctional Facility in Goshen, New York, out of fear of deportation while she works to get grand larceny charges against her revoked.

A Manhattan jury found Sorokin, 31, guilty of multiple fraud charges in 2019, and she served nearly four years in prison before being released in 2021 on good behavior. The German citizen was subsequently arrested by ICE on March 25, 2021, for overstaying her visa in the United States.

“I lived out most of my adult life in NY and a lot of my friends and support system are based in the US,” Sorokin told Fox News Digital in an emailed statement. “I don’t see a reason why I should be banned forever while so many violent offenders get released by ICE on daily basis.”

She added that she has “a great network of people in place who support” her and want to see her “succeed.” Sorokin is “constantly receiving various offers and introductions,” she said when asked if she had any concerns about establishing professional connections in New York City if she were to be released.

“I can’t wait to put my ICE issues behind me and finally get a chance to take back control of my story,” she said.

An ICE spokesperson said in March that its Board of Immigration Appeals (BIA) “granted Sorokin’s emergency stay request” in November 2021, pending removal. The agency does not discuss future removal operations due to operational security.

“[R]ight now she’s being held by ICE, but the Federal Government is holding her immigration detainer, and they’re trying to deport her back to Germany,” said Sorokin’s attorney Duncan Levin, a former federal prosecutor and partner at Levin & Associates, PLLC. “And she is fighting that so that she can stay in the United States. So now she is fighting the deportation proceeding.”

Levin is filing two sets of appeals, including one that “is basically a motion for a new trial for proceedings in the Supreme Court” and one “with the first department.”

The then-28-year-old woman deceived a network of friends and financial institutions into believing she had a roughly $67 million fortune from her father overseas.

Sorokin was also accused of forging financial records in a loan application for a $22 million to fund an elite art club with exhibitions, installations and pop-up shops that she wanted to create and open to private members, prosecutors said. She was denied the loan but persuaded one bank to lend her $100,000 she failed to repay.

“The basis for the deportation is the conviction,” the attorney explained. “So, if the conviction was overturned and she’s successful, then there’s no basis to deport her. What I think people a lot of people don’t realize is that she’s done all of her time in this case … and frankly, she could self-deport any time she wanted to or agreed to it. But she’s doing this to vindicate her legal rights. … She is adamant that she was wronged and that her legal rights be vindicated.”

The faux German heiress and art aficionado on Thursday hosted her first art show since being convicted at a New York City venue. She attended virtually, according to Juda Engelmayer of Herald PR.

“I’m very excited about my first real collection of 21 sketches that are autobiographical and touch on a variety of topics,” Sorokin said. “I put a lot of thought in these works and each one has a layered meaning. This is the first step of me telling my story from my perspective. I don’t want to explain too much, and leave people room for interpretation.”

Sorokin, who has nearly 1 million Instagram followers after Netflix released a show based on her life called “Inventing Anna” in February, has managed to keep her social media accounts active from prison, appearing frequently in news interviews and on podcasts.

Inspired by the true story of a total fake.

As for a potential path to citizenship, Sorokin said she “will decide the best course of action” regarding immigration matters with her lawyers “depending on the progress of the case.”

“She is very optimistic about our case that we have for us and remains upbeat,” Levin said of Sorokin. “[A]nyone who takes a deeper look into this case can see the problems that led to her conviction. And she certainly fears that. I think he’s optimistic about the road ahead.”