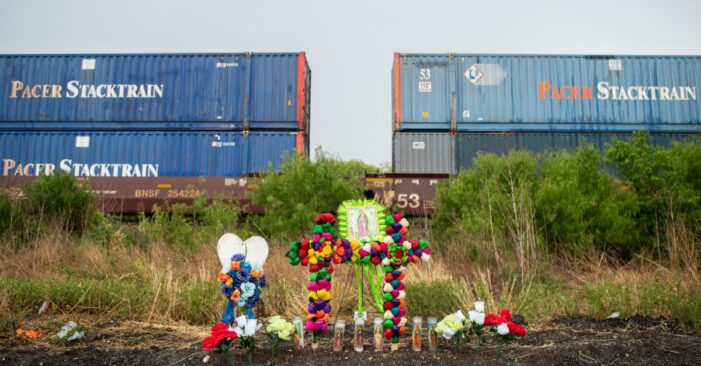 The tragic deaths of migrants in Texas are a clear failure of Title 42 Policy. It has become one of the deadliest migrant-smuggling operations in U.S. history. The migrants died from suffocation, dehydration, and heat stroke after enduring an hours-long journey in the back of a tractor-trailer that drove through Mexico into Texas.

The following is a statement from Mario Carrillo, Texas-based Campaigns Director of America’s Voice, reacting to the tragic deaths of fifty migrants in a tractor trailer near San Antonio: “This is a human tragedy. At least fifty people have lost their lives, each of whom had dreams, families and futures. They each represented the most basic human desire – to make the most of their time on this earth to make a contribution to their loved ones. They risked everything for a better life.

Yet, even in death, they are dehumanized. I find myself thinking of the life they were hoping to find here in the U.S. The hopes they had and the fear they had to overcome. Only to meet this fate.

Inescapably, this also is a policy tragedy and an indictment of an array of cruel and failed deterrence-only policies – from the border wall to Title 42 to ‘Remain in Mexico.’ All are based on the wrongheaded notion that we can keep people from migrating in the first place. Our current broken system empowers reckless human smugglers and traffickers and incentivizes dangerous treks to our southern border.

We need a new approach: one that will put smugglers and traffickers out of business: one that includes expanded legal channels for safe and orderly migration; one that addresses and alleviates the root causes of forced migration from within our region; one that increases regional cooperation agreements to deal with this on hemispheric basis.

And finally, yes, this is a political tragedy. Gov. Abbott’s obscene initial response, filled with finger pointing and lies about ‘open borders,’ reminds us that dehumanizing those who seek a better life to score political points is despicable. Our elected leaders should engage in a serious reevaluation of a failed set of policies, not in cheap political mudsling.”