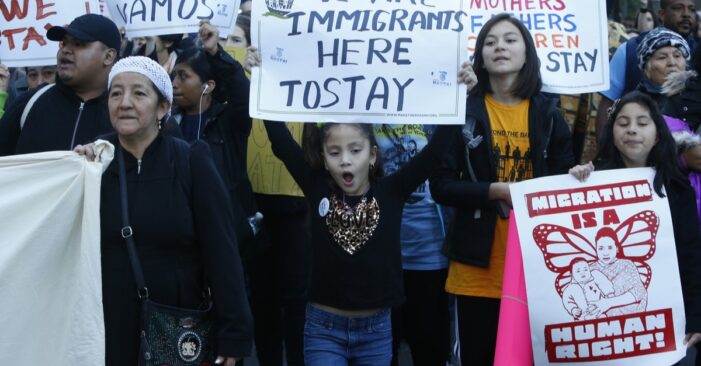 Ten years ago this month, countless Latinx community members wanted to know what happened to their home, a state whose highway signs welcome visitors to “Alabama the Beautiful.”

They ultimately marched in the streets, wearing shirts with slogans saying, “We love Alabama. We are Alabama.” Their faces were marked with worry, panic and tears amid an atmosphere of uncertainty.

The state had just enacted what lawmakers proudly proclaimed the nation’s toughest anti-immigrant law, one that “attacks every aspect” of an undocumented immigrant’s life. The Beason-Hammon Taxpayer and Citizen Protection Act – better known as House Bill 56 (HB 56) – was modeled after an Arizona law that granted police the authority to demand “papers” demonstrating citizenship or legal status during routine traffic stops. HB 56 was signed into law by Gov. Robert Bentley on June 9, 2011.

The law sparked a federal class action lawsuit led by the Southern Poverty Law Center and a coalition of civil rights groups. It challenged HB 56 as unconstitutional by arguing that the law subjected people in Alabama – including countless U.S. citizens and undocumented immigrants – to racial profiling, as well as unlawful interrogations, searches, seizures and arrests, in violation of the Fourth Amendment.

By October 2013, a settlement agreement essentially gutted HB 56 by blocking its most egregious provisions. Portions of the law that had been temporarily enjoined by federal courts were permanently blocked under the agreement.

A decade later, the most notable provision that remains is a requirement that employers must ensure their workers are documented. But this provision often goes ignored, said Freddy Rubio, who served as cooperating attorney on the case with the American Civil Liberties Union of Alabama Foundation.

“This is still the law, but not one employer has been prosecuted,” he said. “So, Alabama goes through all these hoops, but not one constituent has enforced it. We look away from the employer and instead go for the ‘little people.’ The law didn’t work then, and it’s still not working today.”

Despite HB 56’s failure, it was a sign of things to come as politicians continued to exploit anti-immigrant sentiment for political gain.

“HB 56 was one of the early iterations of the current wave of anti-immigrant laws and policies, but it was not the last,” said Efrén C. Olivares, deputy legal director for the SPLC’s Immigrant Justice Project. “While many saw the Trump administration’s hateful policies as an anomaly, the reality is that those policies were the culmination of years-long buildup of anti-immigrant rhetoric and xenophobic discourse around the country, including in the Deep South.”

Long before Donald Trump launched a successful presidential campaign by proclaiming that Mexican immigrants are criminals, rapists and drug dealers, legislators in Alabama were marketing fear and stoking xenophobia by claiming that immigrants were stealing jobs from “American” workers and costing taxpayers money for public education and other benefits.

Yet, at the time of HB 56’s passing, only 2.5% of the population in Alabama was undocumented, and those residents had paid $130 million into the state’s tax coffers in 2010. Rubio called HB 56 a “scare tactic” and noted that in a hypocritical twist, the statute excluded penalizing workers who worked for the wealthy.

“Part of the law which was very racist and convenient was that house workers were excluded from violating HB 56,” he said. “The rich could still have their housekeepers, they could keep their landscapers and their yard workers.”

‘Go back to Mexico’

Perhaps the most insidious effect of the law was unleashing vigilantism, as it led some Alabamians to believe they could now cheat, harass and intimidate the Latinx community with impunity.

For Carmen Gonzalez – a U.S. citizen who had two citizen children and whose husband had legal status – the xenophobic, hostile climate fostered by HB 56 hit hard, she told the SPLC at the time.

One day, after returning from an errand, she noticed a piece of paper in the floorboard of her vehicle. “Go back to Mexico,” the note read. She realized that she had left her window slightly cracked. Someone must have seen the flyers on her vehicle advertising a meeting for Latinx community members. Her children were sad, alarmed, and Gonzalez – then 27 – had to remind them that they had every right to be in the U.S.

Martha, who only provided her first name, was 19 and in the process of adjusting her status to comply with immigration law. HB 56 left her separated from her son when she was arrested and taken to jail for not having her car lights on while driving.

“I didn’t know how long I would be there without seeing my son, my husband and my family,” she told the SPLC. “It was very difficult. The most difficult thing for me was when they put me in handcuffs.”

When “Laura,” then 37, took her 13-year-old daughter “Alejandra” to a local  clinic in Birmingham for a fever, the clinic told her that it could not treat undocumented immigrants.

A few days later, Alejandra was rushed to an emergency room, where she underwent surgery for an abdominal abscess. Laura was faced with $2,000 in medical bills, which she believed could have been prevented had her daughter been examined at the clinic. The mother recounted the story to the SPLC at the time but asked that their real names not be used.

The cruelty at the heart of HB 56 was not a flaw, but a feature. The whole point was to make life so difficult for immigrants that they would “self-deport.” After the bill became law, Rubio said his phone rang nonstop as fears mounted in the Latinx community.

“People wanted to know if they should get a power of attorney,” Rubio said. “They wanted to know what was going to happen to their children, if they were going to have to sell their house, or if they could go to work.”

As local police began asking for “papers,” many immigrants found themselves detained by U.S. Immigration and Customs Enforcement, separated from their families, their lives shattered. Many others stopped going to work or to school out of fear of being locked up.

Industries dependent on migrant labor were dealt a severe blow. Farmers could not fill the void created by the loss of workers who had once plowed fields and planted crops, which were now rotting and threatening the state’s economy.

“What happened is that we became an unwelcoming state; that’s what we gained,” Rubio said. “And for any legislature that says we can ‘scare’ immigrants away, I challenge them to go to any chicken plant, any landscaping plant, and you’ll find undocumented workers.”

Then, as now, immigrants also helped fill high-demand jobs in health care, technology and other specialized industries in the state and around the country.

“Instead of trying to frighten workers into leaving, Alabama should be focusing on how to make itself a better state and create more revenue with the help of immigrants,” Rubio said. “When we say the United States is one of the best countries in the world, that we have a strong economy, we cannot say that and then exclude the millions of workers who are estimated to be undocumented.”

Gabriela Maxcy, a senior supervising office administrator who has been with the SPLC since 2005, said she will never forget the calls from immigrant families and hard-working members of Alabama communities who were frightened and uncertain about what the future held for them and their children a decade ago.

“The passage of HB 56 may be receding into the past, but this anniversary is a timely reminder of the importance of continuing this work in our communities,” Maxcy said.

The SPLC’s Olivares echoed the sentiment.

“Our march against HB 56 and other anti-immigrant laws continues and has now morphed into an aspiration for a future where equity, justice and liberation are a reality for all people, regardless of their immigration status,” he said.